David Bowie and the Legacy He Left Behind

Home » David Bowie and the Legacy He Left Behind
Previous Next

David Bowie and the Legacy He Left Behind

On January 10, 2016–only two days after the inimitable pop rock icon David Bowie celebrated his 69th birthday, he finally succumbed to the liver cancer that he had vigilantly fought for 18 months. He and wife Iman had kept the news of his health private, which meant the news of his death came as much more of a shock to the world. According to those who were closest to Bowie, this was in line with practically everything else about how he lived his life to excess–being a long time smoker and heavy drug user, which ultimately affected his health.

A Passionate Life
Born David Robert Jones, Bowie rose to massive fame at a young age, He came up with his stage name from his enduring passion with American Wild West history, after Jim Bowie. At a 1997 concert performance celebrating his 50th birthday, the star shared, “I don’t know where I’m going from here, but I promise it won’t be boring.” And surely, he lived a life that was anything but boring, with a rich career spanning many different styles, all his personal creations and forever bearing his name. The dedication of Bowie continued, right up to his death, evidenced in one aspect by his release of a critically acclaimed album “Blackstar,” only days preceding his passing.

His Unique Legacy
There have been no pop icons to even come close to his level of success, in following Bowie, instigating a passionate cultish partisanship that enjoyed a far longer lasting influence than other music industry iconic fan followings. His unique and highly creative persona was evident in everything he did, with many impressive memories he now leaves behind. When he was only 17, he founded The Society for the Prevention of Cruelty to Long-Haired Men, and was interviewed about it by the BBC. Bowie was seriously credited with helping to bring down the Berlin Wall, arising from his Berlin period during the late 1970s. Of the two albums he released there, one included a song about two lovers who first met at the Berlin Wall. Then, in 1987, during his West Berlin concert–which was performed so close to the Wall that it was enjoyed by people on the Wall’s other side – it produced violent fighting and rioting. It was only a week later when President Ronald Reagan instructed Mikhail Gorbachev–leader of the Soviet Union–to “tear down the wall.” Upon receiving the notification of Bowie’s death, the German Foreign Office (in a tweet,) thanked him for the part he played in the wall’s demise. Bowie declined in 2000, when the British government offered him a CBE title, and he even later refused the honor of knighthood from the Queen, commenting that they were pointless, and not what he had been spent his life working on.

Ziggy Stardust
Everything Bowie created radiated with his unique brand, and he now leaves behind a saga of vigilantly-blazed trails, from when he became the androgynous Ziggy Stardust, to his music video shot in space, his career was always about making history of one form or another. With a wardrobe consisting of dresses and tight bodysuits, shockingly bright red hair and over the top makeup effects, he portrayed his futuristic belief in a genderless world. His move in this direction cost the rocker some of his fan base, but only momentarily. He later expressed regret over coming out in an interview, telling the world that he was homosexual, then later bisexual–as he admitted that he had always been a closet heterosexual, all along. 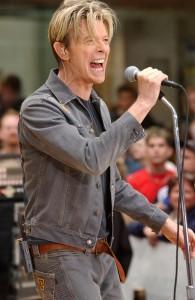 Bowie Beyond Music
Bowie enjoyed success in film, as well as from being a talented artist and producer. Among his most impressive film fetes remain The Man Who Fell to Earth and the Jim Henson cult winner Labyrinth, both of which received rave reviews. Bowie possessed an amazing talent for being able to reinvent himself, more often than any other artist, and he inspired many new trends.

Hello Iman
While in flight to perform a concert, Bowie happened to be flipping through a magazine where he spotted a pic of Iman, commenting that he just had to meet her. The introduction eventually took place, and the two have been blissfully connected ever since, with this, Bowie’s second marriage producing a baby girl, Alexandria Zahra Jones–or Lexi Metro. Bowie berated MTV in a 1983 interview for not featuring enough black artists, and was very vocal on this subject at every opportunity.