America’s sweetheart Jennifer Aniston and Justin Theroux quite brilliantly managed to tie the knot on Wednesday, just days short of their three-year engagement anniversary, without hooplah and paparazzi to liven things up. They made their relationship legally binding in an intimate ceremony held in the backyard of their Bel Air home, with family and a few close friends.

The Rock and Rings
Aniston was quoted as saying, “Justin is the best thing to happen to me in my 40s.” She says she loves wearing the whopper of an engagement ring given to her by Theroux, and plays with it all the time, wondering if she’ll ever get used to it, describing it as the most beautiful thing she’s ever had. Tobey Maguire’s wife Jennifer personally designed the couple’s wedding rings.

The Decoy
It’s not clear whether or not Courteney Cox, who was the bride’s maid of honor was privy to the big surprise, but the guests all showed up, expecting to celebrate Theroux’s birthday at the couple’s home. Wonder what kind of presents they brought him. Birthday gifts would not be entirely inappropriate for Theroux, as his 44th birthday is on August 10. Ironically, the couple’s friends have been thinking that a surprise wedding just might be imminent. To illustrate just how seriously they anticipated it, a few have been known to show up at a four of their most recent (requesting very casual attire) Bel Air Mansion parties, all decked out in their finest wedding attire. 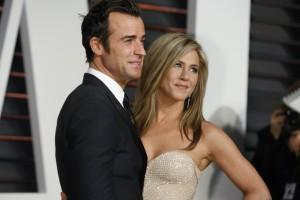 The Details
The groom’s best man was his tattoo artist good pal Scott Campbell, who is the husband of Lake Bell. Guests reported that the whole occasion felt more like a “warm house party” than some kind of all out over- the- top production, which certainly contrasts Aniston’s first marriage ceremony in 2000, when she was wed to Brad Pitt. That little affair cost over a sweet $1 million. Aniston’s hair was styled by Chris McMillan, and the couple’s close friend and famous photographer Terry Richardson handled the nuptial and reception photos, which lasted into the night under a beautiful moon. And Sia sang her hit song “Chandelier.” The cake, which was topped with two puppets, was vanilla and strawberry.

The Departure
Photos were made showing the new Mr. & Mrs. at a Van Nuys airport, while boarding a private plane on Thursday, in the lively company of several of the couple’s friends, including Chelsea Handler. Destination? Bora Bora, which, with layovers and multiple connections on commercial planes, takes around 20 hours. Surely their private plane got them there much faster.