Celeb News: Miley Gets Cozy With an Ex, Ready for Kids??

Home » Celeb News: Miley Gets Cozy With an Ex, Ready for Kids??
Previous Next

Celeb News: Miley Gets Cozy With an Ex, Ready for Kids??

Ohhhh, the power of love! Miley Cyrus seems to have finally gone through all the candles she had to burn at both ends, and now, the wild child is posing as a demure, soft kitten, with tame, shoulder-length more brown ombre than white tresses and it’s been awhile since we’ve seen the tongue. What gives?

Strange Terms of Engagement
Yes, the couple has reformed, and it’s official: Miley and Liam are back together–however, even though the reports of the actual engaged to be married aspect of their former relationship have been flooding the rumor mills, the handsome, Hunger Games star Hemsworth has his own report to make. He states that he has not proposed to Miley Cyrus this time–which means that it was all Miley’s decision to slip that oversized diamond engagement ring onto her third finger, left hand–which Liam gave her–along with an official proposal, back in 2012. The beautiful 3.5 carat rock is a Neil Lane which Liam participated in designing for Miley. Those nuptials were nullified in 2013, and we can only guess why, as we watched Cyrus spreading her bare and all-raunchy self too thinly at the time, and didn’t stop until very recently.

True Love and Support
According to an insider, the two are telling their friends they are engaged. Other insider details include how Hemsworth never stopped being in love with Cyrus, who is now receiving more support for their wedded union from Hemsworth’s parents, whose only former objection had to do with the couple’s age, than anything. They are now happy and supportive of the couple’s status. The duo has been spotted locking lips in public, and apparently, Miley has already wrapped up in moving all her belongings into Liam’s Malibu home. 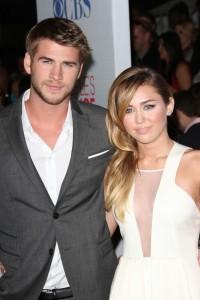 A Malibu Home Nursery?
As inside stories go, Miley and Liam are proceeding full-tilt, with procreation plans and Miley sharing with friends that she’ll be stopping all forms of birth control to expedite the production of a bambino–and either before or after is fine with her, apparently it doesn’t matter. This comes in contrast to an earlier time in the couple’s first rendezvous, when there was a reported pregnancy scare, which had Miley in a nail-biting frenzy. Not so, this time, as their current plans–according to close contacts–include the combo of marriage and family. Friends and insiders are mostly wishing the two would slow down just a tad, to rekindle their relations and settle into married life, seeing as how they have their entire futures to put the complexities of a family into place. It’s not likely that either one is listening, though.