Kaley Cuoco has a way of making a big splash wherever she goes, and there’s not a shy bone in that near-perfection body of hers, either! She was recently spotted at the March Alzheimer’s Association’s “A Night at Sardi’s” benefit, rocking a head-turning, jaw-dropping red gown of floor-sweeping length with awesome cutouts that revealed her sides and a bit of her abs in stellar fashion. Red’s gotta be her color, and she pushed it into her later performance at the same event, but this time, she was clad in red, via a red studded crop top, paired with short shorts and fishnets.

Motivation for a Move
Kaley shares that she was glad she had been given a full year’s notice that she would be appearing on the cover of Shape magazine, which she credits for pushing her to do something to seriously shape up, much more than she was. She dished about how when she and former husband Ryan Sweeting were first married, the two were so active (and with more youthful metabolisms,) that they could (and did) keep the drawers of their night tables to either side of their bed full of candy. Each night, they would converge on the bed where they would share a ritual “midnight snack” from the contents of these drawers. Now, calling it “mindless eating,” she focuses on everything she consumes. The candy in bed ritual was one she had to cut out, although she insists that she still must allow herself one cheat day a week, to keep sane. For Cuoco, that day is Sundays, when she lies out by the pool, enjoys a drink and munches on pizza. Once Monday hits, she’s back to her dedicated diet that is devoid of crap, as she puts it. In a few interviews, she has quiffed about her toning coming from a diet of strictly almonds and air. Add to this, her regimen of yoga five times weekly. 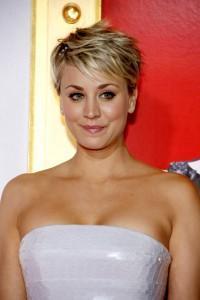 Kaley’s Look
In addition to her killer body, she obviously knows how to make her skin sparkle to perfection, with a sun-kissed bronzed glow. When she was recently asked to comment on her golden, glowing look we learned that Kaley’s doing it the safe way. She had to respond by giving her go-to makeup artist, Jamie Greenberg–for the applied-indoors bronzing. Kaley shares details of her product breakdown via several Internet sources, for anyone wanting to follow to the letter. Wherever Big Bang Theory’s Cuoco is photographed these days–whether at the SAG Awards, performing for Alzheimer’s, at the Grammys–she’s going to be showing some serious skin, and most of it is in the form of cutouts. And who can blame her?

On the Ellen Show
With her fabulous body, she graced the Ellen Show wearing a very feminine navy and pink dress, but toned it down with some white Stan Smith kicks. What she did not tone down–and may have been the reason behind her wardrobe choice–was the tattoo on her back–which the open back of the dress secured by a simple tie at the bra line–revealed. We now see a beautifully-rendered moth tattoo, most artfully created to forever obscure the earlier tattooed date from her previous wedding. Her ombre brown to platinum, mid-length tresses looked better than ever, and she lifted them a bit to reveal the entire piece.