Which Celeb Couples Are Heading Down the Aisle Next?

Home » Which Celeb Couples Are Heading Down the Aisle Next?
Previous Next

Which Celeb Couples Are Heading Down the Aisle Next?

It was a long, hard summer of celebrity breakups. Some of our favorites called it quits, including Ben Affleck and Jennifer Garner, Gwen Stefani and Gavin Rossdale, and Blake Shelton and Miranda Lambert. It’s so hard for us to believe that these once PERFECT looking marriages could go so sour, so fast – after all, these people have EVERYTHING going for them! Even more breakup rumors swirled. It can get a fan down when so many divorces seem to happen all at once and to your favorite stars. Years of investing in these celebs relationships, rooting for them to make it – it’s exhausting!

Fortunately, there are many more couples holding strong and others who are getting ready to walk down the aisle to help us maintain our faith in love. Time marches on and these are just a few of the couples ready to tie the knot next in lavish ceremonies that will surely set trends for the next few months at least!

Courtney Cox and Johnny McDaid
It seems like just yesterday that David Arquette and Courtney Cox were becoming more than just “friends” on the hit television series. Then came Coco and now, it’s all in the past! “Friends” star Courtney Cox is set to get hitched to Snow Patrol member Johnny McDaid. The two announced their engagement right at the start of October, but they did not announce plans for the wedding (not surprising since most celebs these days want to keep those details private to minimize the media frenzy).

Corbin Bleu and Sasha Nicole Clements
Teens everywhere are gonna hate to see this guy off the market – Bleu, one of the stars of “High School Musical,” got engaged to his girlfriend Sasha Nicole Clements after proposing in front of the castle at Walt Disney World. He created a fairytale beginning for their next chapter, and he made women the world over swoon. 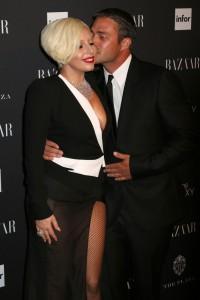 Lady Gaga and Taylor Kinney
Who would have ever though that Lady Gaga would settle down?!? She’s trading in her Poker Face for the look of love for Taylor Kinney.The famously flamboyant singer has been uncharacteristically quiet about her love life, so this engagement came as a surprise. She broke the news to fans by showing off her heart-shaped engagement ring on Instagram. She was engaged on Valentine’s Day.

Marc Anthony and Shannon de Lima
Another “I can’t believe that Jennifer is not his wife anymore” situations! First came love, then came twins, now, many years later, these two have long called it quits and the former Mr. Jennifer Lopez is set to wed model Shannon de Lima. The couple got engaged in March, and they are supposed to marry this month in the Dominican Republic.

Which celebrity couple do you think should get married? For which wedding are you most excited to see the pictures? Tell us about your dream wedding – even if it’s to an out of reach celebrity! Who knows, stranger things have happened!