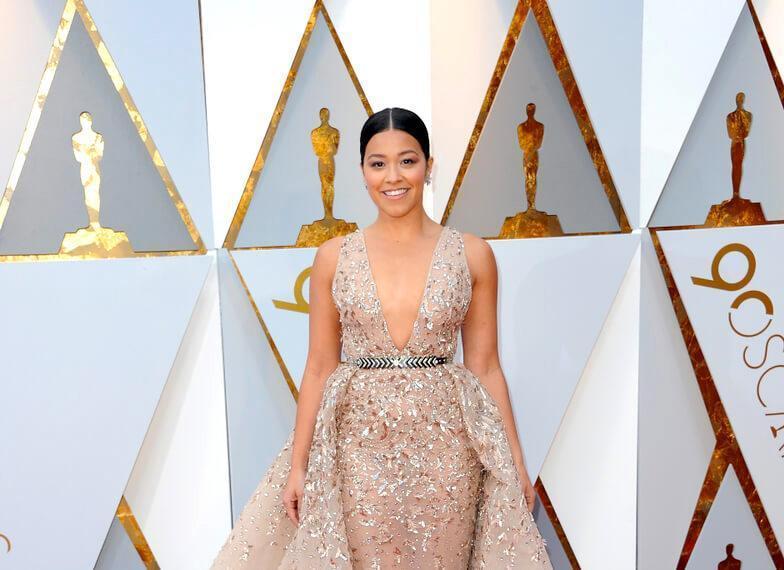 In the past year, the film industry was greatly impacted by socio-political events, thanks to the global #MeToo movement and the subsequent Time’s Up campaign that was initiated to tackle the issue of abuse and sexual harassment in the workplace.

The charged political atmosphere even impacted awards’ fashion – for example the Golden Globes, where virtually all Hollywood celebrities wore black to protest sexual harassment in the entertainment industry.

This, however, wasn’t the case at the Academy Awards, and this year’s red carpet witnessed some of the most daring designs we’ve seen in years, but also the old-school elegance without which a true Academy Awards ceremony wouldn’t be complete.

Let’s take a look at some of the most inspiring haute couture pieces seen at this year’s biggest night in entertainment industry.

You could say that there’s no better way to dress for the Oscars than to literally embody the coveted golden statue that gets handed out to the most accomplished individuals in the industry.

And while this is a bit of a running theme when it comes to awards fashion, the year 2018 saw more metallic pieces on the red carpet than ever before.

For example, the previous Best Actress winner and this year’s presenter Sandra Bullock dazzled in a gorgeous black-and-gold sequined gown from Luis Vuitton. The Crash star completed the luxurious look with a sleek, mid-parted do, adding the to overall polished appearance of her Oscars ensemble. 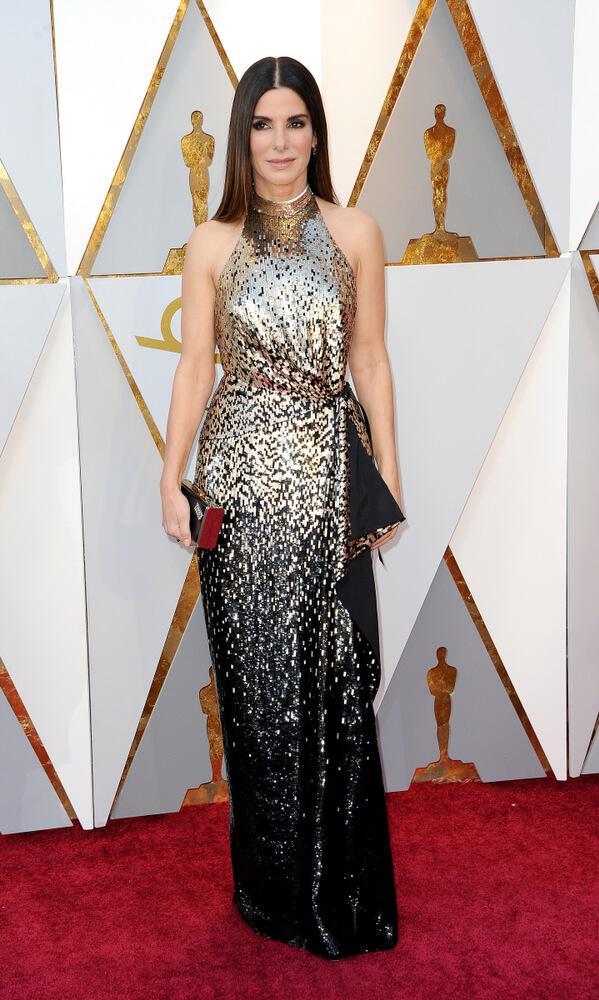 Another A-lister who rocked the shimmery style was Jennifer Lawrence, who turned heads as soon as she stepped out on the red carpet in a mesmerizing metallic gold dress designed by her signature Dior.

The eye-catching fusion of black and gold was also spotted on Lupita Nyong’o, who stunned at the red carpet in a luscious, futuristic Versace gown.

The Black Panther lead combined her fashion-forward ensemble with a sculpted, gold-infused hair ‘do and a sultry sapphire eyeliner.

A slightly different take on the metallic trend could be seen on Gal Gadot, who stared in one of the biggest blockbusters of the past year, Wonder Woman.

The Israeli actress, who showed up to the Oscars as a presenter, rocked a silver sequin gown designed by Givenchy. The gorgeous number featured a dynamic, flapper-inspired dropped waist and dynamic fringe skirt.

The glistening look was further emphasized with some serious bling, which was provided by Tiffany & Co.

Looking at the outfits from this year’s red carpet, it’s safe to say that bold colors were definitely one of the designer favorite go-to’s.

And blue was among the most popular hues for the 2018 Academy Awards ensembles.

One of the most stunning examples of the sapphire trend was seen on Nicole Kidman, who took everyone’s breath away when she appeared in a structured electric blue number from Armani Privé. 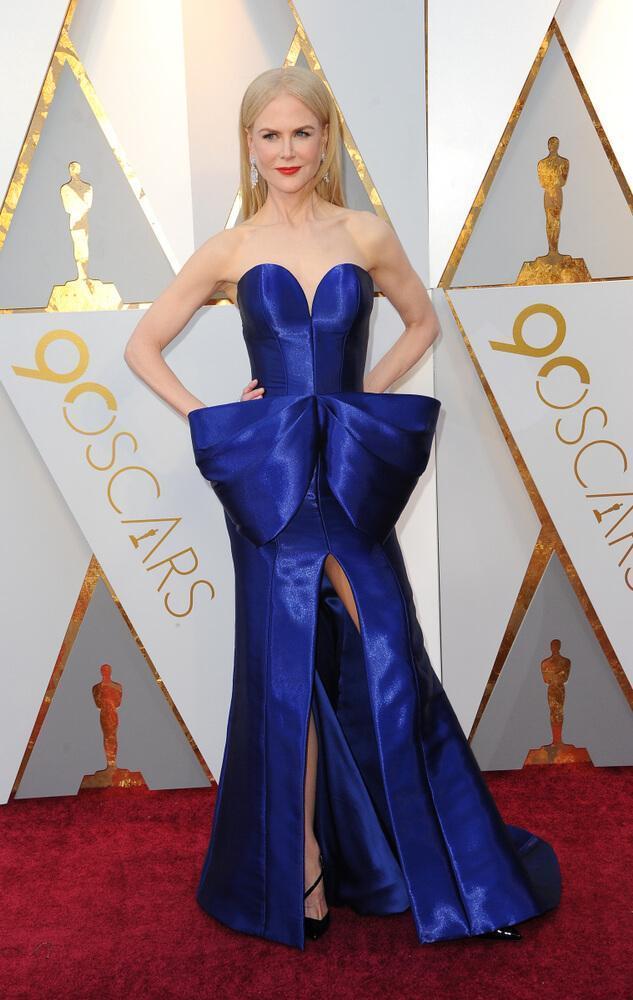 The head-turning piece was elevated with a sensual high slit and a full-blown bow at the front.

A more classic iteration of the azure tendencies was spotted on Jennifer Garner, who brought her A-game to the red carpet in a flowing royal blue Versace gown that stunned from every angle.

The Alias star’s ethereal dress featured an asymmetrical bodice and a long, draping train. The sweeping vibe of the gown was complimented with dazzling jewelry from Piaget, as well as Garner’s gorgeous wavy locks that were reminiscent of vintage silver screen divas.

This year’s Oscars red carpet has seen an unusual number of all-white ensembles, on both actors and actresses who showed up at the iconic Dolby Theater.

Among some of the most memorable ivory looks of the evening was Jane Fonda’s sleek, long-sleeved gown from Balmain. 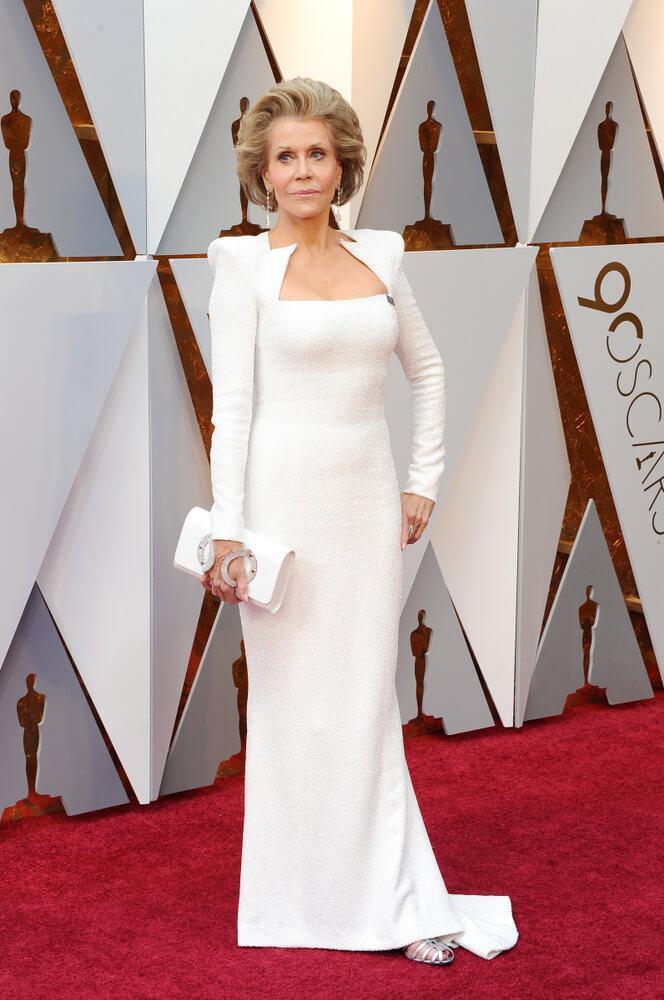 The 80-year-old Hollywood legend, who attended the ceremony to present an award, combined the crisp, structured gown with Salvatore Ferregamo shoes and exquisite earrings by Chopard.

Another pearly-white ensemble could be seen on the Australian actress Margot Robbie who dazzled everyone present in a custom made Channel Haute Couture gown.

The pristine-white dress, which has been created especially for this occasion, was adorned with elaborate embroidery.

The I, Tonya star and first-time Oscar nominee accessorized her Channel number with a pair of Roger Vivier shoes and a stunning chain-strapped purse.

Laura Dern was also one of the stars who appeared on the red carpet in a crisp white get up.

The 51-year-old actress, who recently starred in Star Wars: The Last Jedi, stunned at awards ceremony in an single-shoulder full length gown designed by Calvin Klein. The angelic look was completed with Swarovski jewelry and classic Hollywood waves that were swept to the side.

The R’n’B style icon Mary J. Blige was also one of the white-clad leading ladies. Arriving at the Academy Awards sporting a gorgeous beaded number by Versace, the Mudbound star proved that white certainly doesn’t have to appear too stiff and uppity by combining her pristine gown with a punk rock-inspired blonde troubadour.

There were even some male stars who decided to deck out in white for the film industry’s glam event.

Among them was the acting wunderkind Timothée Chalamet, who showed up at the red carpet in an off-white custom made Berluti suit with a crisp white dress shirt underneath. The first-time Oscar nominee, who starred in the critically acclaimed movie Call Me By Your Name, contrasted his pristine suit with a pair of black shoes and messy, just-got-out-of-bed hair.

Another color that could be seen on numerous starlets at the 90th Academy Awards was red.

And while this vibrant color is forever fashionable, designer have still managed to reinvent it and show us how to wear it, 2018-style.

One of the most ravishing red looks was seen on Allison Janney, who not only won the Oscar for the Best Supporting Actress for her role in I, Tonya, but also managed to pull off one of the most coveted red looks of the night.

The 58-year-old actress graced the awards ceremony in a full-length gown by Reem Acra. The scarlet number featured extravagant sleeves and a deep neckline. The bright color of the dress was accessorized with a Roger Vivier clutch, a pair of Jimmy Choo sandals and blinding Forevermark diamonds.

A different, yet equally mesmerizing all-red ensemble was spotted on Leslie Mann. The comedy queen, who showed up to support her Oscar-nominated husband Judd Appatow, stepped onto the red carpet in a gorgeous princess gown designed by Zac Posen. Mann’s dress featured a strapless neckline and billowing, lightweight skirt with a subtle floral print. The This is 40 start combined her ruby number with a simple red lip and a casual blowout.

A more avant-garde iteration of the classic red was seen on Maya Rudolph, who graced the ceremony in a bold crimson caftan. This exquisite Valentino ensemble worn by the Bridesmaids star was definitely serving a dash of cult chic. Despite covering everything but her face and hands, the Saturday Night Live comedienne’s extravagant sartorial choice definitely didn’t go unnoticed. 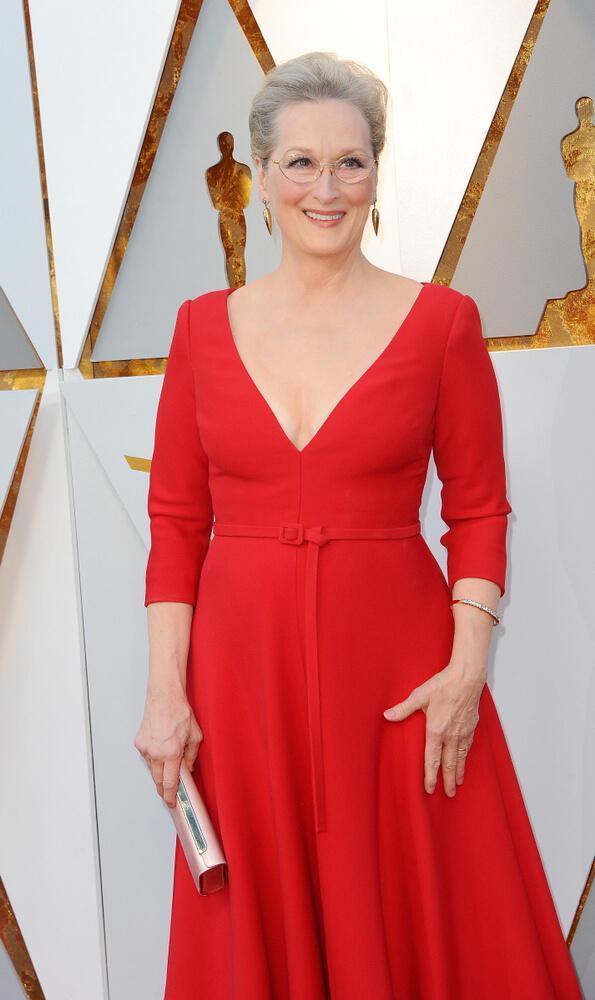 Hollywood icon and three-time Oscar winner Meryl Streep also decided to deck out in ruby at this year’s Academy Awards. The Post star stepped out on the red carpet in a monochromatic red gown by Christian Dior Haute Couture. Streep teamed up her scarlet number with a Christian Louboutin clutch, Fred Leighton bling and a pair of shoes by Stuart Weitzman.

When it came to designs, judging by the gowns we’ve seen on the red carpet, the mantra was to big or go home.

And one of the most creative details on this 2018 red carpet couture were bows.

The more obvious one was spotted on Nicole Kidman, whose oversized bow added extra drama to her already bold Armani Privé ensemble.

A more inconspicuous bow was seen on the young Irish actress Saoirse Ronan, who showed up in a breath-taking piece designed by Calvin Klein. 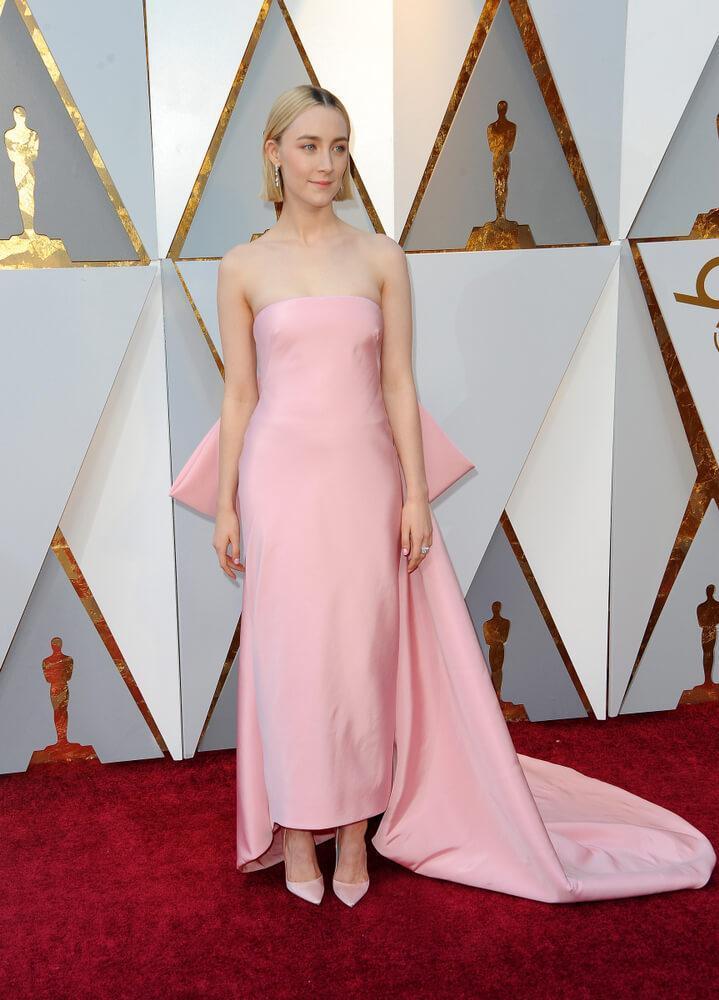 The Lady Bird star and third-time Oscar nominee stunned in a blush gown that looked clean and simple from the front, but the back view revealed a voluminous train and a dramatic bow.

And to show that bows can be styled against a more traditionally masculine silhouettes, we had Emma Stone, who adorned her richly colored blazer with a hot pink band with a bow.

Not all Oscar ensembles were fiery red or bright blue.

Some starts decided to stick to the timeless, ever-elegant nude and champagne hues, which is undoubtedly a foolproof choice for the most glamorous night in Hollywood.

For example, the Best Actress nominee Sally Hawkins dazzled at the red carpet in sequined Armani Privé gown with long sleeves and an intricately adorned hemline.

The glitter 1970s-inspired piece worn by The Shape of Water star was accessorized with a black sash, a casual updo and luxurious Chopard jewels.

Allison Williams, star of the hit dark comedy Get Out, decided to go full glam and step out on the red carpet in a shimmering nude Armani Privé gown. The first-time attendee accessorized her couture dress with old-school Hollywood waves and shining chandelier earrings.

Gina Rodriguez, who attended the Academy Awards as a presenter, appeared in a show-stopping rose gold gown designed by Zuhair Murad. 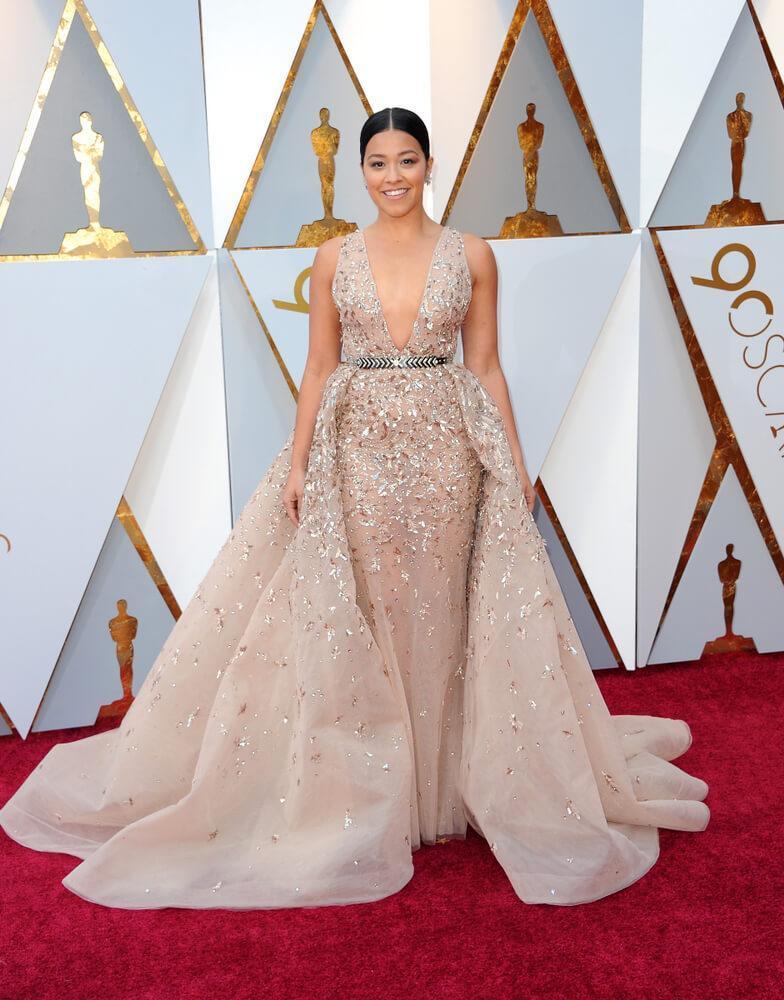 The elaborately adorned number featured a plunging neckline, an over-the-top train and a body-hugging cut. The Annihilation star topped off the look with a sleek mid-parted pony tail, serving serious princess realness.

Another stunning nude gown was spotted on Mira Sorvino, who graced the ceremony in a sweeping Romona Keveža Fall 2018 gown. This stunning piece, which Sorvino wore on the red carpet walking alongside fellow actress Ashley Judd, featured a delicate floral print and a dramatic train.

This year, Oscars red carpet pink could be seen in all of its iterations: from innocent blush hues to fun, bubblegum pink.

Among the most popping pink looks of the night was Viola Davis’ vibrant floor-length gown, which marked a sharp turn compared to her last year’s classic Hollywood glam Armani piece.

The How to Get Away With Murder star dazzled in a bright pink dress by Michael Kors. The three-time nominee accessorized her colorful look with dazzling hoops, a matching clutch and some seriously voluminous curls. 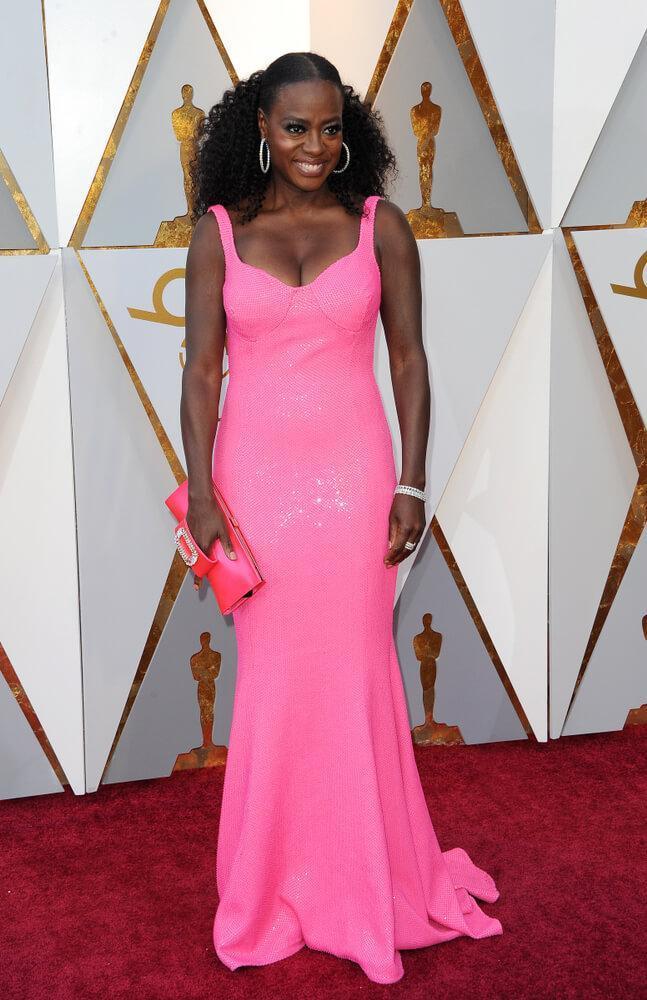 A more tamed hue of pink was seen on Saoirse Ronan, whose elegant Calvin Klein gown meshed this classic, innocent color with a more fashion-forward cut.

The Irish up-and-comer and Lead Actress nominee paired up her romantic blush number with a sleek, mid-parted bob and gorgeous satin pumps by Christian Louboutin in the matching shade.

Another jaw-dropping pale pink look was seen on Danai Gurira, who walked down the red carpet in a fabulous strapless gown by Gabriela Hearst. The pink-pearl ensemble was complemented with jewelry from Massika, while the Zimbabwean-American actress added a touch of drama by rocking an elaborately adorned hair ‘do.

And now you now all about the most coveted couture showcased at this year’s Oscars ceremony. Between the fairytale gowns, extravagant designs and lavish jewelry, we’re not sure if the next Academy Awards will be able to beat this year’s opulence. 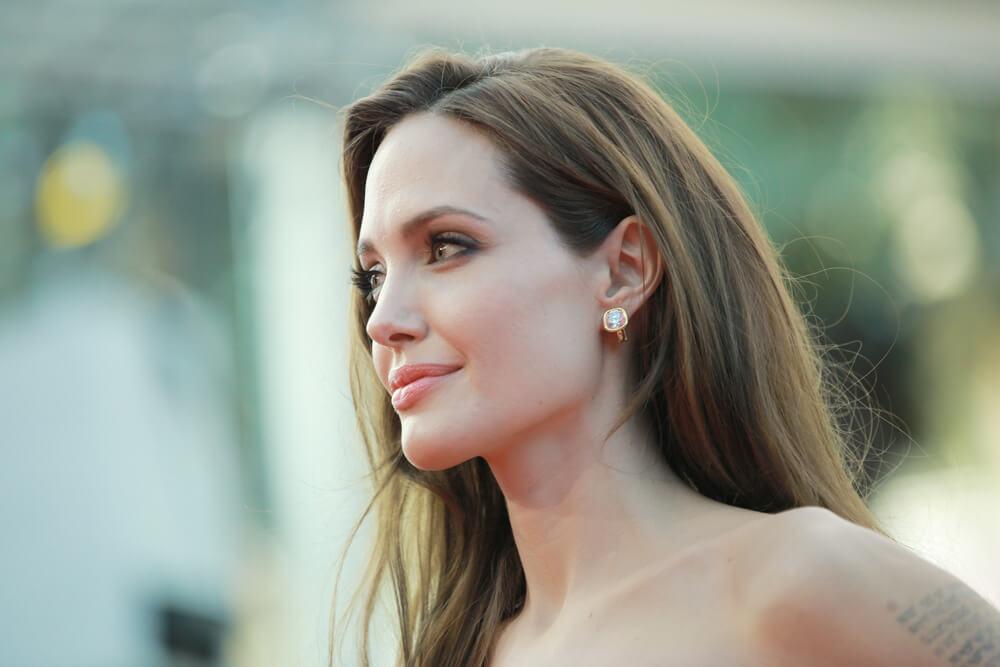 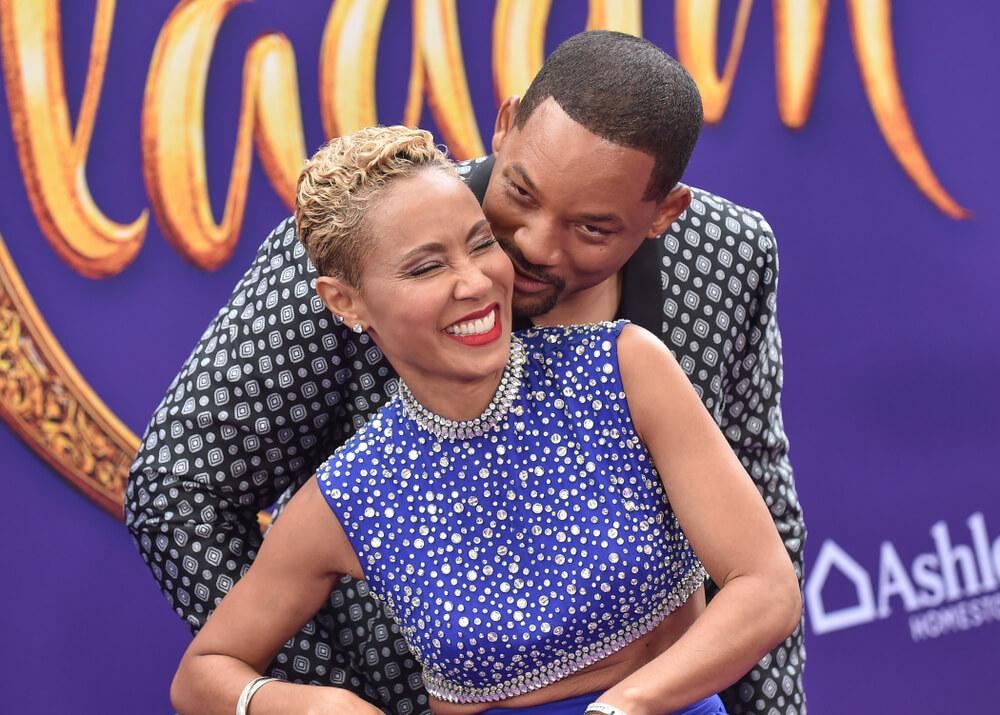 '7 Haute Couture Inspiration from the Oscars 2018' has no comments