9 Healthy Snacks that Can Be Served in a Cup

9 Healthy Snacks that Can Be Served in a Cup

When we say something is our “cup of tea” we use it to mean that it’s something we like, something we enjoy. But some have been wondering lately,  “Why tea?” Given, tea is a comforting and relaxing drink,(and full of antioxidants, BTW), but can’t we do better than tea? Apparently, there are enough people out there who think we can.

The latest trend is food in cups, which means there are a whole host of new things we can use in place of tea in the old expression. How about, “It’s my cup of cake,” “cup of yogurt,” or even “cup of quiche?” The new idioms may take a little getting used to, but it probably won’t take much getting used to when we start eating the dishes – or cups rather.

Here are some of the lowdown on the food in cups and an investigation of whether or not we should start packing the teabags.

So why this sudden trend toward eating everything in a cup? Is it psychological? Do we positively associate spoon feeding with being fed by our mothers as babies?  Or is it practical? After all, cups are all about portion control. Most diets advise eating a certain number of cups of a certain food each day. Or is it just that we’re too lazy to actually cook anymore? Why not just throw everything in a mug and heat it up? It all ends up in our stomach the same way.

Or is it just that how cute all that mini food looks in those little cups? Either way, people are digging it (pun intended.)

The only problem with eating food in a cup is that most food doesn’t fit in a cup. That’s why you have to make them in the cup. So don’t bother trying to do it the other around. If food in a cup is your cup of tea, here are a few less sloppy ways of making it.

Yogurt parfaits probably win the award for the most impressive looking food that you can make in five minutes, which is why you want to use a clear cup for these. 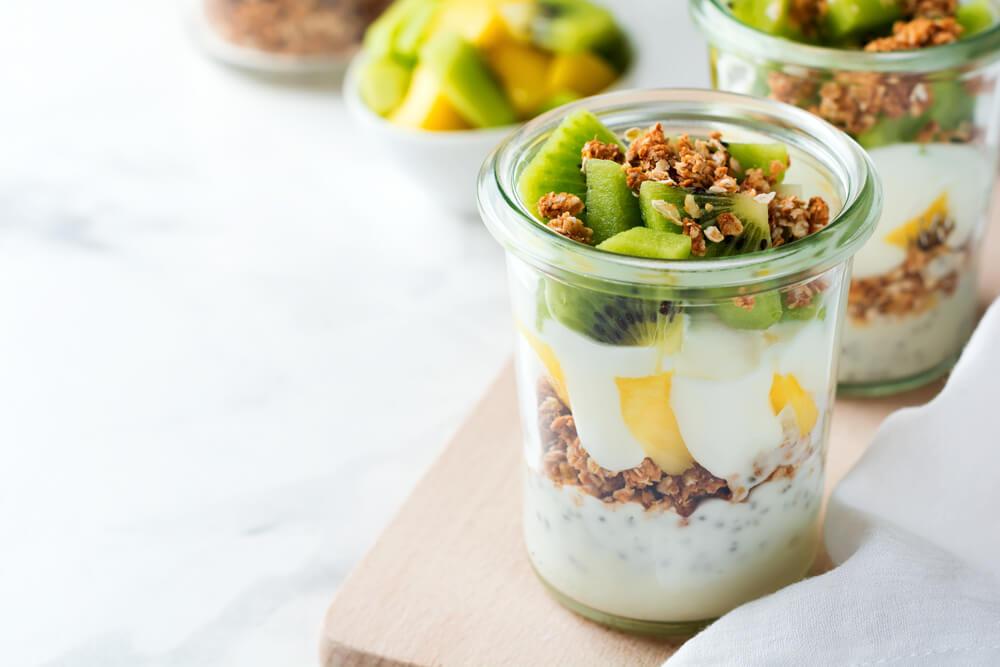 That way you can see all the pretty layers of yogurt topped with fruit, like blueberries, strawberries, raspberries (berries, especially blueberries have powerful antioxidants), and even mango and kiwi and banana.

Ah, French toast. Those huge golden hunks of egg bread topped with butter and melted syrup, and heaping with fresh fruit and sprinkled with sugar. Now think of that cubed – bread cubed that is.

Not only is the vegan banana French toast in a cup is made with cubes of French toast rather than whole slices, but it’s also made with bananas and coconut milk instead of eggs. Curious? Here’s how you can get a handle on your French toast.

We’ve all heard of cupcakes, why not cup pies? Or mug pies while we’re at it? If you like your pies individual, you can make them in a cup, or in a mug if you want to serve it warm. Shepherd’s pie, apple pie, even chicken pot pie-there is no pie that can’t be made in a cup. Best of all, they’re easy as pie to make. 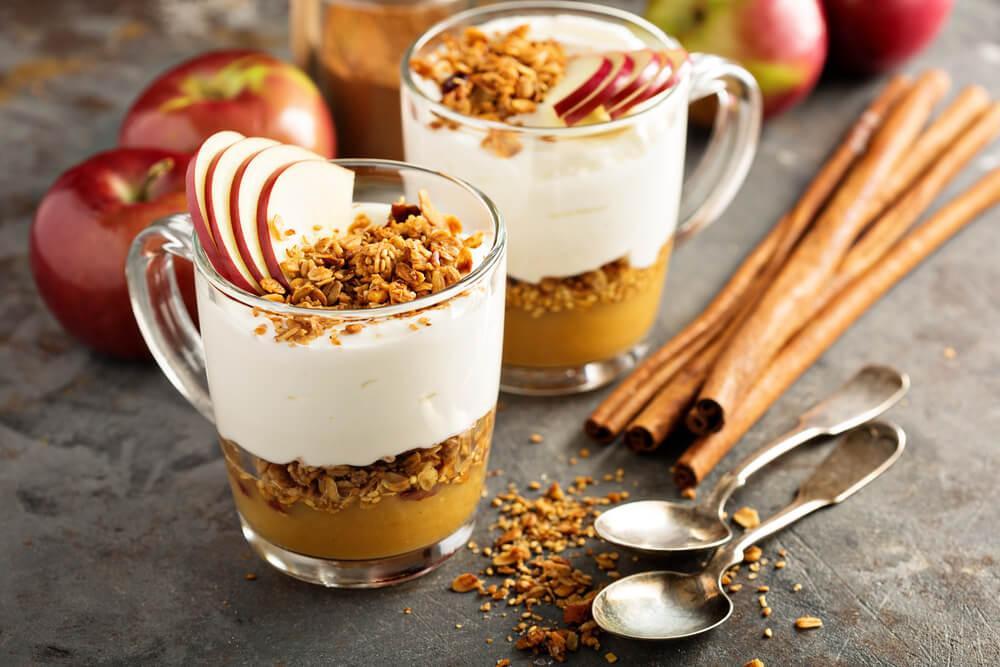 Here’s a recipe for Apple Mug Cake that you can make in a microwave:

Wow! Sounds like they didn’t leave anything out! Are you sure they can fit that in a cup? Of course the can, and here’s how:

Topping with whipped cream is optional, but it comes highly suggested. Use light cool whip to keep the calorie count down.

Lasagna in a mug? Oh no, you didn’t! That huge sheet of glorious pasta layered with gobs of cheese, cheese, and more cheese in a cup! That needs to be seen to be believed! Believe it, sister. Vito Corleone may be rolling over in his grave, but it is true. Lasagna in a mug has arrived.

The pasta in the lasagna mug isn’t in sheets, but the layers are there. You can either cut lasagna noodles to fit in the mug or use penne for convenience. Get together all your favorite lasagna ingredients, and let the layering begin. You don’t even need eggs or milk. Just alternate layers of pasta, gooey cheese, sauce,  and all your favorite fixings and ‘divertiti’ ( enjoy yourself in Italian.)

For the health conscious:  Consider using soy cheese, low-fat cheese, or Greek yogurt instead of or with the whole milk cheese. You can also substitute whole wheat pasta for pasta made from flour.

Healthy Quiche In A Mug

If you’ve ever baked a quiche, you know it’s no easy task. You want the eggs to set with the milk, but not so much that the texture becomes rubbery. You don’t want the filling to be too wet, and you don’t want it to become too dry because you overbaked it in the oven. It’s a wonder they didn’t just think of throwing it in microwavable cup years ago. 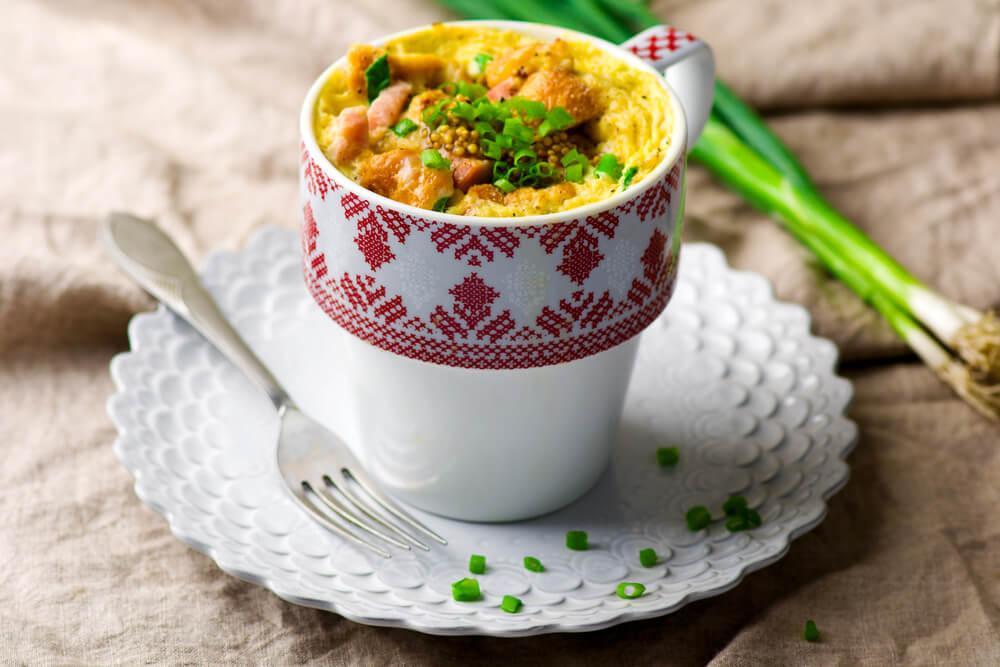 Making healthy quiche in a mug is a lot more foolproof and a whole lot easier than making it the traditional way, and you can save some calories by eliminating the crust. (If you can’t do without the crust, there are some recipes with chunks of crusty bread thrown in- we have yet to try those).  Instant quiche anyone? Here’s a quick recipe for a healthy spinach and cheddar quiche that won’t burn in the oven.

Pancakes, the name suggests they are made on a pan. Does that mean when you put them in cups, they become cupcakes? That seems to have been taken already.  But we’ll sort all that out later. What matters most is that the food formerly known as the pancake can now be served in cups and the days of flipping are over, which is really good news for the less coordinated. Plus, they sort of give a new meaning to “a stack of pancakes”

Just grease up the mug with butter, mix up  2 tablespoons coconut flour, 2 tablespoons Greek non-fat yogurt, and one tablespoon milk,  pour it into a microwave-safe mug and microwave for one minute. Spurt on the syrup and breakfast is served. Add some extra butter to the top – take that IHOP!

Speaking of breakfast, Peanut Butter and Oatmeal Cake is a sure fire way to really put IHOP out of business. Plus, with the cake in one mug and the coffee in another, you can proudly call yourself a two-fisted breakfast pounder.

Throw in some mini chocolate chips for some added yum: dark chocolate for a little antioxidant power.

Usually, brownies are real squares but put them in a cup, and just watch them let loose! 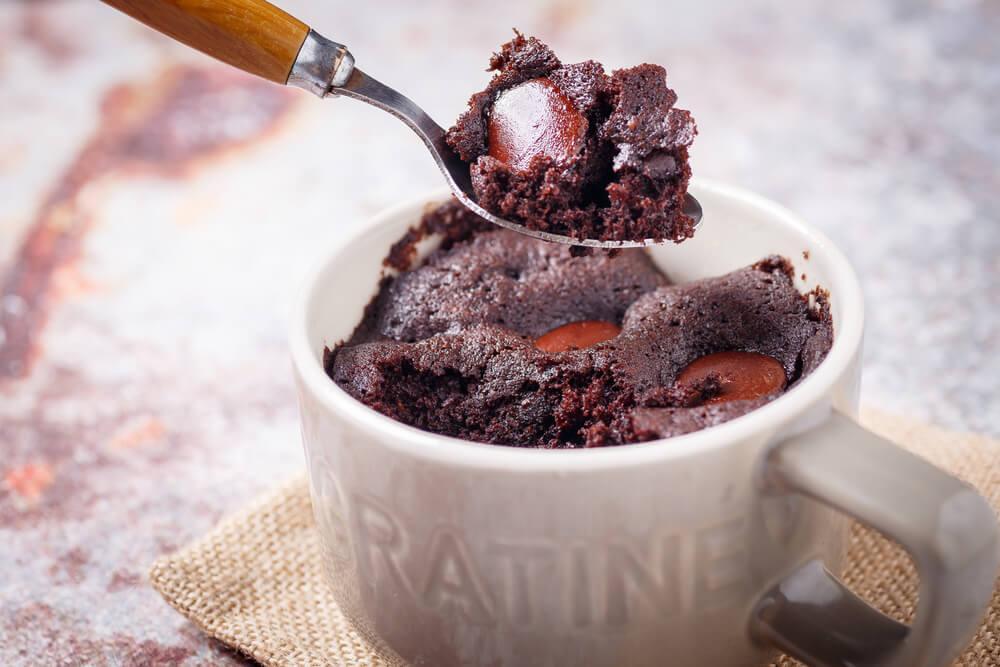 Here is a recipe for brownies in a cup for those who think outside of the box:

If in dire need of protein, you can also mix it up a little and swap all-purpose flour for protein powder, and whisk in an egg. Pop it into the microwave and you’ll have your healthy protein snack in no time!

When you see a  white takeout container it can only mean one thing – a Chinese food delivery has occurred.  You can practically smell the spare ribs and soy sauce just by looking at one of those cute cardboard packages.  But hold your chopsticks! Now, you can get your Chinese in a mug delivered right from your microwave, and you might have to find a new way to store the leftovers.

If the thought of fried rice made in a microwave seems to be incomprehensible to you, you’ll start comprehending it when you try this recipe. Just buy the fortune cookies separately to make the meal more authentic.

Let us know what your cup of food is. We’re always looking for new ideas!