Home » Are You Celebrating National Ice Cream Month?
Previous Next

To cone, or not to cone, that is the question to be decided. If you cone, you get the cone, and that means more for the money, right? But then you also have to lick strategically in order to keep the ice cream from nosediving onto the floor, and there is no thirty-second rule for ice cream. Talk about a meltdown.

If you don’t cone, you don’t get the cone, but you do get to spend a little more time with the ice cream, explore its textures a little, push it around with the spoon a little, get more intimate, take the time to savor it in your mouth.

Do you ever wonder what your ice cream order says about you? If you order a vanilla soft serve, would that say you’re the sweet simple type? Does an Oreo blizzard indicate a more adventurous side? Would a brownie Oreo blizzard mean your indecisive?

Ice cream is the great unifier, the one thing we can all agree on, the one thing that makes us all happy. Cone or no cone, waffle or none, soft or hard, topped or not, it is the one thing that never disappoints, that is until it shows up on your clothes or your hips, but that’s the subject for another conversation.

You don’t need an excuse to eat ice cream in July, but National Ice Cream Month is as good a reason as any. So, let us take the opportunity to lift our spoons to the people who made it all possible.

Gen Xers and baby boomers may remember the voice of Tom Carvel doing the voice over for his ice cream store, and while it may not have been the most energetic voice, it certainly didn’t hurt his sales.

The story of Carvel Ice Cream has all the elements of the American Dream. Poor boy borrows money from his future wife Agnes to buy an ice cream truck. Truck gets a flat tire on Memorial Day weekend, 1934. Tom sells his whole stock of frozen custard at the sight of the breakdown, realizes frozen desserts are good business. Yadda yadda yadda the Carvel franchise is born, and so came the novelty ice creams that would define a generation.

Soon the Flying Saucer ice cream sandwich flew in, followed by the Icy Wycy sherbet on a stick. Who even knew what the waxy topping on the Cherry Bonnet and Brown were made of? It was the 1940’s! And you can bet there were no nutrition facts on the Tortoni. Who could think about calories when you were holding a maraschino cherry top hunk of coconut coated ice cream on your spoon?

Then there was Cookie Puss, Fudgie the Whale and the Carvelog log cake. In 1989, Tom Carvel sold the company to Investcorp for a cool $80 million dollars. Is that living the American dream or what?

Today, NYC stepped inside our new Summer Blizzard Menu with the help of DQ Superfan, @nateberkus. See all the summer fun on our story today!

Around the same time Carvel and his wife were selling their frozen custard by the side of the road, John Fremont “J.F.” “Grandpa” McCollough and his son Alex were thinking along the same lines in Doubs, Iowa. They convinced their friend and loyal customer, Sherb Noble, to sell their self-developed brand of soft serve ice cream in his store in Kankakee, Illinois. On the first day of sales, Noble managed to scoop out over 1,600 servings of the stuff, and the first Dairy Queen was opened in Joliet, Illinois in 1940.

Nowadays, no one thinks of Dairy Queen without thinking of the Blizzard. Whoever had the genius idea of crushing up candy and blending it with soft serve ice cream deserves an award.

The Blizzard’s name derived from its ability to defy gravity. It is known to be so thoroughly cold that it can be held upside down without spilling. In fact, there is a company policy at Dairy Queen that one Blizzard per order has to be flipped upside down by the employee. If said employee fails to do so, the customer is entitled to a free Blizzard on his or her next visit. Keep that in mind at your next Dairy Queen visit.

So, let’s get into the Blizzard here. For those of you not in the know, the Blizzard is a concoction of soft serve ice cream blended mechanically with mix-in pieces. It has been synonymous with the Dairy Queen name ever since its introduction in 1985 when over 100 million blizzards were sold. The most popular flavors are the Oreo Cookie, Heathbar, Chocolate Chip Cookie Dough, Reese’s Pieces, M & M’s, and Butterfingers. Seasonal favorites include the pumpkin pie in October and the cotton candy in June. The Blizzard celebrated its 25th anniversary by ushering in the Strawberry Golden Oreo and Buster Bar Blizzard. The Salted Caramel Truffle joined the menu in 2015 and is still there today.

Remember the days when 31 flavors of ice cream seemed like a mind-blowing amount? In these days in which you can find more than 31 flavors of beef jerky, it seems trifling.

While it may seem like small potatoes today, the number 31 is in no way arbitrary. When brothers-in-law Burt Baskin and Irv Robbins first started their ice cream store in Glendale, California, they came up with the idea based on the premise that a customer could have a flavor every day of the month. Obviously, they weren’t very health conscious.

Of course, we can’t mention all the original BR flavors here, but some were rather progressive. In fact, Baskin and Robbins was a surprisingly progressive company. Little known fact; during the sixties, when a reporter asked what new flavor Baskin Robbins had to honor the Beatles, Irv Robbins used his quick-thinking skills, and five days later, Beatle Nut was on the market and ready to be sold and delivered to stores and causing almost as much mania as the Fab Four themselves

And Beatle Nut wasn’t the only nutty flavor that the Baskin Robbins guys gave us. If it weren’t for Baskin Robbins, pralines and cream may have never been united. The idea for the flavor came about when Irv and Irma were enjoying some pralines at home and inspiration hit. With a little vanilla ice cream and a caramel swirl, the flavor that has become a staple of ice cream was born. As of today, Pralines and Cream remains, along with vanilla, chocolate, chocolate chip and mint chocolate chip as one of the five Baskin Robbins biggest sellers.

If Irv Robbins and Burt Baskin were Jewish hippies from Long Island, they would probably have been Ben Cohen and Jerry Greenfield.

Ben and Jerry’s is more than a brand of ice cream, it’s a way of life. Not only did Ben and Jerry take the idea of combining ice cream with just about anything under the sun one step further, they kept it real, eco-friendly, and down to earth in every way.

When Ben and Jerry first came on to the scene, there were two types of ice cream; the super-premium and the well, premium. The super-premium was the ice cream connoisseur’s ice cream, high in fat and density; Haagen Dazs would be a good example. It was also on the more expensive side of the ice cream price scale.

Back then, premium brands were the Sealtest and Breyers, the cheap thrill ice creams if you will. These ice creams had a little more air, and a little less ice cream, which consequently meant a little fewer calories. In 1978, when Ben and Jerry were launching their brand, it was the richer, fattier ice cream they chose. In fact, Ben actually has a condition called anosmia which is a lack of sense of smell and taste that causes the afflicted to rely on feel and texture of foods. This compelled him to create the rich and intensely flavored ice creams Ben and Jerry are known for today.

But most of all we love Ben and Jerry’s because no matter what they do, they do it with Ice Cream. They protested oil drilling by creating a 900-pound Baked Alaska out of their Fossil Fuel ice cream and promoted fair trade with their Coffee Coffee Coffee BuzzBuzzBuzz ice Cream, and what better way to say it than to say it with ice cream?

Although this is somewhat out of chronological order, it is appropriate that we take a moment here to salute Steve, because were it not for Steve, much of this would never have happened. Steve Herrell is an integral figure in the ice cream continuum, and his story is one worth relating.

In the 1960’s, an event occurred that changed the face of ice cream forever: a friend of Steve’s gave him a Heath bar. And with the first bite, Steve knew he had something. From there, the mix in was born, and Steve began churning out custom blended flavors that appealed to a large audience. In 1973, Steve’s Ice Cream opened and a new revolution in ice cream began.

At the time, of course, cones were 35 cents with 10 extra for a mix-in, which may have been part of the reason Steve went out of business, however, he has been credited with inspiring Ben and Jerry, and forging a link to what we know now as…

What do you get when you combine the mix-ins of Dairy Queen with the premium ice cream of Ben and Jerry? Cold Stone was founded by Donald and Susan Sullivan in 1988, seeking an ice cream that was neither hard packed nor soft serve. Rather, it was deemed “super-premium,” and pretty much took up where Steve left off.

At Cold Stone, patrons are first asked to select the ice cream flavor and then choose a number of mix-ins. The mix-ins are then folded into the ice cream before the customers’ eyes to be shoveled into a “Like It,” “Love It” or “Gotta Have It.” size bowl or cone. Yes, we do, all three.

At Cold Stone, the final product is not a sundae, but a “Creation.” Customers can have a signature creation, which Cold Stone has dreamed up, or they can dream up their own. For those craving chocolate, the Chocolate Devotion is chocolate ice cream blended with chocolate chips, brownie and fudge. For those who can’t decide between ice cream and cake, the Strawberry blonde is strawberry ice cream with pie crust, caramel and whipped topping. It’s all fun and games until someone reads the calorie count. 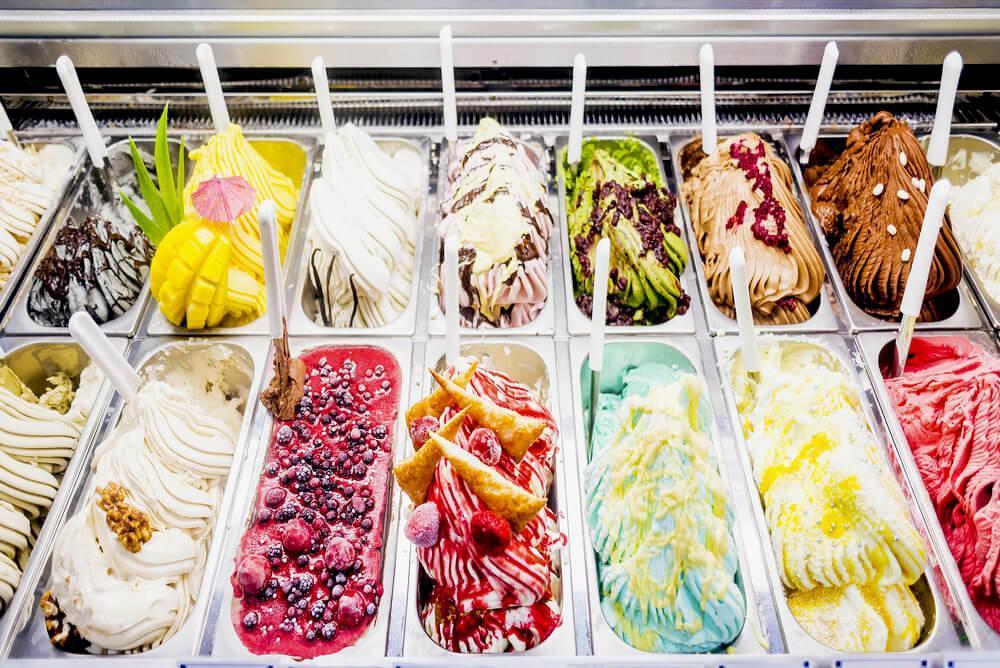 Of course, as with most things, when ice cream reached its height of silliness, the upscale crowd wanted in. Artisanal ice cream moved ice cream from a two-dollar cone to a pricey investment. However, if it’s important to you that your Coffee and Donuts ice cream is made with fair trade coffee and local donuts, it may be worth it for you to cough up the $11 for a pint, and if you want to try the Pistachio Honey Ricotta, it’s probably an amazing experience. Just be sure to snap a picture for Instagram. You’ll want evidence of this.

But who cares about all of this? The best way to celebrate National Ice Cream Month is by eating it, so get the party started. And let us know what your favorite ice cream is! We want to know.