The Latest on the Ben-Jenn Split

Home » The Latest on the Ben-Jenn Split
Previous Next

The Latest on the Ben-Jenn Split

Staying married in Hollywood has got to be one of the most difficult feats to pull off, especially when the marriage is a union of two major A-listers who are in no danger of becoming unemployed anytime soon. And so, with 10 years of making it work, the stunningly svelte duo is not necessarily “throwing in” the towel, but more like “folding the towel and placing it back into the linen closet.”

The Announcement Nobody Saw Coming
While fans are sad to see these two part ways, there is much to be said about the manner in which they seem to be approaching their marital dissolution–with much grace and aplomb. In what was obviously a thoughtfully drafted statement the couple released to the world, they announced the sad news, couched within a diplomatic description of their intent to remain amicable and work together harmoniously to co-parent their children with love and as unified parents. Within a relatively short period of time following the announcement, what the couple shared regarding their plans for a friendly split appears to accurately reflect its tone–at least thus far.

A Good Ten-Year Run Comes to an End
The lovebirds were united in holy matrimony in a private ceremony on June 25, 2005 at the beautiful British Overseas Territory of the Turks and Caicos Islands, just southeast of Mayaguana in the Bahamas island chain. While this was Affleck’s first go-round, it was Garner’s second marital union, following her previous marriage to actor Scott Foley. With no newsworthy, front page reports on the two, it seemed safe to assume that all was well, and especially as evidenced by the births of their three children.  Rumors of a troubled relationship didn’t begin to circulate until June of this year, with the tabloids reporting the problems stemming from Affleck’s propensity for being a workaholic, and how it affected the family, i.e. Jennifer, who is primarily a stay at home mom for the couple’s three children, Violet, 9, Seraphina, 6 and Samuel, 3. 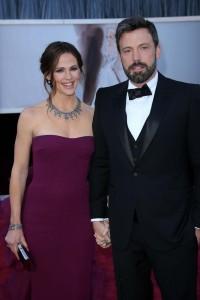 Cohabitating Through Divorce?
And now we find that the two have rented Brooke Shield’s former home in Pacific Palisades, CA, where they plan on living together-but-separately, as they move ahead with their divorce proceedings. The family will remain there together, as tenants until current renovations of their marital home are completed. This rental home for the smooth transition is one where Shields and her husband Chris Henchy once lived. Ultimately, insiders share that while Shields and Henchy are renting it to the transitioning two, they actually have this five-bedroom home up for sale.

A New Divorce Template
In their effort to divorce with love and friendship, the couple has already taken a couple of family vacations together, with both Mom and Dad, now seemingly more interested in developing the friendship side of their union. Could be that these two wind up being an example and raising the bar for others untying the knot.