The Hollywood Walk of Fame, located in the heart of Los Angeles, California, spans a total of 18 blocks; fifteen blocks run down Hollywood Boulevard, and the remaining three blocks run into Vine Street.

The Walk of Fame itself is made up of over 2,600 stars. The stars make up a collective of actors, musicians, directors and producers, theatrical groups, fictional characters and more.

So, what exactly does it take to get a star on the Hollywood Walk of Fame?

With so many stars on the Walk of Fame, it may seem like it’s a simple feat, however, that assumption couldn’t be further from the truth. Read on to learn how one achieves their very own star on the Walk of fame!

Below are 11 underrated celebrities who’ve successfully made it through all four steps of the process. Check ‘em out!

The judge that we hate to love, Judge Judy Sheindlin, of the CBS afternoon courtroom program Judge Judy was star number 2304 to received her plaque on the Walk of Fame in 2006.

The New York native started her television career after retiring from her duties as a Manhattan, NY Family Court Judge. Her reality tv show captures the court proceedings of legitimate small claims court cases in a true-to-life courtroom set.

The show first aired in 1996 and has gained a vast fan following. In fact, there have even been similar small claims court shows that have come along, but no television judge has been able capture an audience the hard-hitting, no-nonsense Judge Judy Sheindlin does. You can see Judge Judy’s star for yourself at 7065 Hollywood Blvd.

Although many accredit Thomas Edison for the invention of the light bulb, this man was dubbed as America’s Greatest Inventor for more than that. Believe it or not, the film industry might not be where it is today without the many inventions of Edison.

In addition to the forever fruitful light bulb, Edison had a major hand in motion picture and sound recording, all thanks to his inventions of the phonograph and the motion picture camera.

As a tribute to his contributions to the entertainment industry, Edison received a star on the Walk of Fame in 1960 (this almost three decades after his passing. You can find Thomas Edison’s star at 6700 Hollywood Blvd.

In 2007, almost a full seven decades after The Wizard of Oz hit theatres, The Munchkins got their star on the Walk of Fame. That’s what we call a perfect ending to the Yellow Brick Road. You can see The Munchkins star for yourself at 6915 Hollywood Blvd.

Born to his mother and father as Maksymilian Faktorowicz, Max Factor was the most prominent make-up artists in Hollywood in his time.

Factor began his career in the beauty industry at just 11 years old when he started working alongside a wigmaker and cosmetician. Factor went on to open his own shop where he sold handmade skincare, make-up, and wigs.

In his mid-thirties Factor moved to Los Angeles to work in the entertainment industry where he found immediate success. It didn’t take long before Factor was highly sought after by filmmakers and actresses for his ability to customize each person’s look for their big screen debut.

In 1920 Factor launched his very own self-named line of makeup products for the public—insisting that everyone could look like a movie star. Factor was inducted into the Hollywood Walk of Fame in 1981. You can pay a visit to Max Factors star located at 6922 Hollywood Blvd.

That’s right, the 8 ft. 2 in. star of Sesame Street has his very own star on the Walk of Fame. The original Big Bird was played by Caroll Spinney when the show first ran. Big Bird captured the attention—and hearts—of preschool aged children and their parents with his jokes, singing and counting abilities, as well as his perfectly timed obliviousness and kindness.

Believe it or not, the United States Library of Congress named Big Bird a Living Legend in 2000. The big yellow bird, who famously lives on 123 Sesame Street was inducted into the Hollywood Walk of Fame in 1994. You can visit Big Bird’s star—and revisit some of your childhood memories—at 7021 Hollywood Blvd.

That’s right—the household name whom you know and love has her very own star on the Walk of Fame. White is a television personally, film actress, and most commonly known as the hostess of the evening game show Wheel of Fortune.  White began spinning the wheel in 1982 and still does so today. Since then, she has accumulated a major fan following—who dub themselves Vannafans.

In addition to Wheel White can be found working on television endorsements, nutritional videos, photoshoots and more. Our personal favorite of all her projects is Vannastyle.com—the website that White launched where she shows of the high-fashion and often exclusive outfits that she wears on Wheel. Vanna White got her very own star on the Walk of Fame in 2006. You can see the star for yourself at 6255 Sunset Blvd, Ste 150.

Winnie the Pooh, or Pooh Bear is the fictional, human-like teddy bear that you’ve grown to love since the 1920’s. Winnie the Pooh was first featured in a poem, then into a series of books, then Disney took ownership of the bear and incorporated him into a number of features which have turned out to be the company’s most successful franchises to date. Today, Winnie the Pooh can be found in coloring and reading books, DVD’s and television shows, amusements parks, children’s toys and more.

Somehow this bear has been able to capture the hearts of many past generations and will undoubtedly do so for generations to come—there’s just something about that belly-shirt wearing, honeypot licking teddy bear that we can’t help but love. There have been 45+ different movies featuring Winnie the Pooh and this bear won’t stop there. In fact, Pooh Bear made his way to the silver screen in the live action film Goodbye Christopher Robin (2017), and then again in the most recent release Christopher Robin (2018).

Winnie the Pooh was honored with his own star on the Walk of Fame in 2006. You can visit the star at 6834 Hollywood Blvd.

In 1991 Nickelodeon debuted their second ever Nicktoon (i.e., cartoon) called Rugrats. Rugrats revolves around a group of toddlers—Tommy, Chuckie, twins Phil and Lil, and Angelica—and the unusual adventures that they get into with a little help from their imagination.

After only 65 episodes the show was put on hold, with only a few holiday-teamed episodes released. Although no new episodes were being released, Nickelodeon continued to play reruns for about a year and the show wound up with a major popularity boost—ratings were so good they went back into production.

Not too soon after, The Rugrats franchise had a number of movies following each season and even a spin-off called All Grown Up, which featured The Rugrats themselves as they navigated their pre-teen years. The show ended after 9 years on air—13 seasons—lading it a title of the eighth longest-running American animated television series. In that time Rugrats received over 20 awards, one of which happened to be a star on the Walk of Fame in 2001.

Whether you were a Rugrats fan or an All Grown Up fan (or both!) you can check out The Rugrats’ star, located at 6600 Hollywood Blvd.

Over the past three decades celebrity chef, Bobby Flay, has become one of America’s favorite chefs, restauranteur, and reality television personality. Flay is owns and runs almost 20 restaurants across the country, has hosted and guest starred on a number of programs on The Food Network, and has been a guest judge on a number of cooking shows across numerous networks.

In 2015 Bobby Flay was honored as the first ever chef to receive a star on the Walk of Fame. You can visit Bobby Flay’s star for yourself at 6141 Hollywood Blvd.

Walt Disney, an entrepreneur, animator, voice actor, and—most famously—film producer, was born and raised in the city of Chicago, IL. It was in Chicago that Disney found his love for art and landed his first job as a commercial illustrator.

In his early twenties Disney and his brother moved to California where they opened Disney Brothers Studios. It wasn’t until 1928 when Disney co-developed America’s most loved mouse, Mickey Mouse. Not before long Disney began putting out full-length feature films—you know, the Disney classics—such as Snow White and the Seven Dwarfs, Pinocchio, and Bambi.

In the early 1950’s Disney opened his first of many amusement parks, Disneyland. Ten years later he began working on the development of Disney World, which Disney planed would become the center of Experimental Prototype Community of Tomorrow (EPCOT).

Only a year into the development of Disney World and EPCOT, Disney developed lung cancer and passed away. Prior to his passing, Disney won 26 Academy Awards (out of 59 nominations), as well as umpteen more awards and nominations—in fact, Disney has been nominated and awarded more than any other individual to date.

One of these many awards include Disney’s very own star on the Walk of Fame, which he received in 1960. You can visit Walt Disney’s star at 6747 Hollywood Blvd. 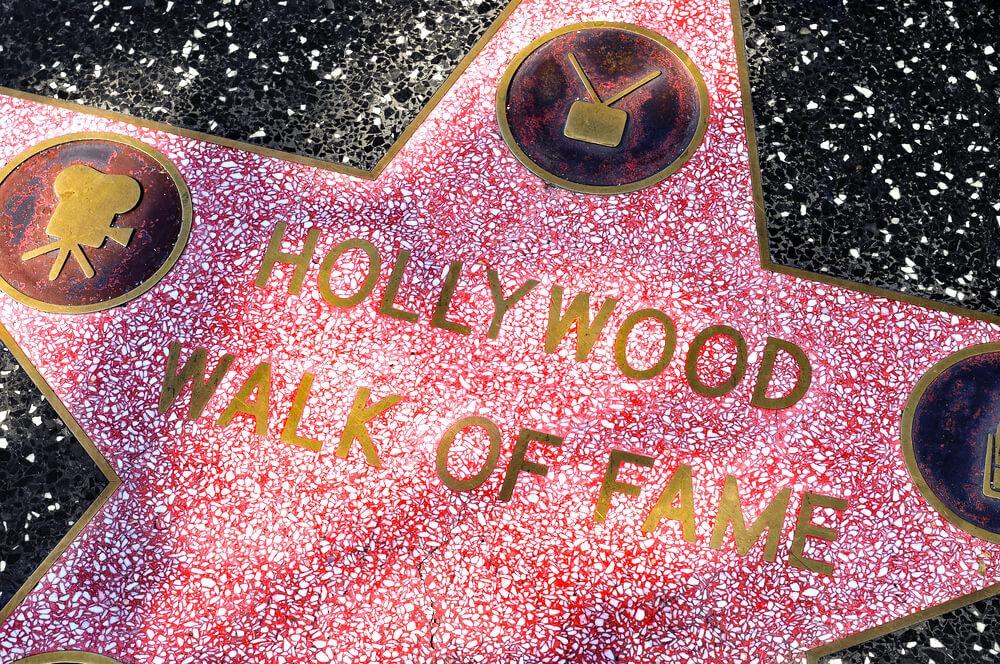 Do you know anyone else on the Hollywood Walk of Fame that we may not have guessed? We want to hear all about it!

About the Author: Alecka Camp