It’s summer in New York, the grass is green, the sun is shining, and the Queen Bees aren’t the only ones getting their buzz on.  June is gay pride month and that means every gender-bending- trans – bi- lesbian – queer -or- on the fence individual can put their tutus and fascinators on and parade like peacocks through every city and town in America. Hey, and even if you can tick off the M or F decisively on your driver’s license, you’re more than welcome to come and take part in the action.

In New York, LGBTQ identity is a part of the city’s identity. New York is not just about sexual freedom, it’s about the freedom of expression. Gay pride month in New York is not just a time for queer New Yorkers to celebrate, it’s a time for all New Yorkers to get down with their queer selves and let their rainbow flags fly.  If you’re lucky enough to find yourself in the Big Apple this June, here are some places where you can see the city in its true and most uninhibited form.

Dating back to the 1970s, the Gay Pride March in New York City is your mama and daddy’s Gay Pride March.  Second in size only to the Sao Paulo Gay Pride Parade as the largest celebration of its kind, the New York Gay Pride March takes you back to the real summer of ’69, and we’re not talking about Bryan Adams sitting in his daddy’s car. The march, which takes over Lower Manhattan on June 30th this year, passes by the Stonewall Inn, the infamous site of the Stonewall riots June of 1969 and unofficial birthplace of the gay rights movement. Be sure to bring your LBGTQ  game, when the news cameras roll, the floats will definitely not be the main attraction. Dress to impress.

Talk about dive bars!  If self-pride takes a backseat to gay pride, you’ll want to find yourself at the World Pride Pool Party in Times Square where the party is wet and tongs are well within the dress code. While the juiciest details have yet to be revealed, the party details have been: 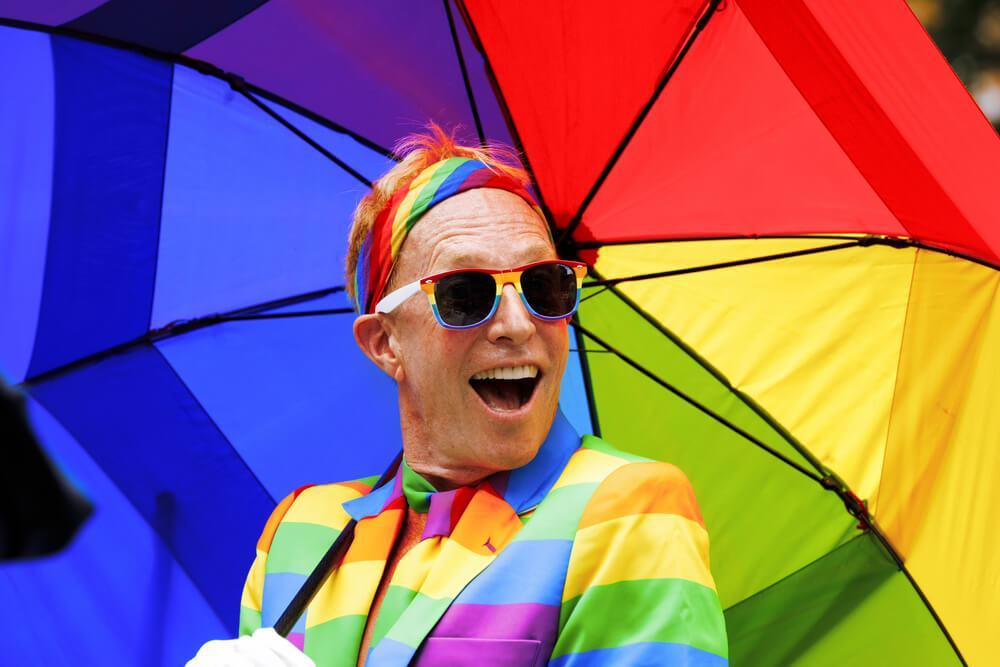 Calling all girls who want to have fun whether they be L, B, G, T, or Q. The World Pride Opening Ceremony is going on this year, and Cyndi Lauper is ready to break out her crinolines and kick up her red pumps.   Queens’ own original pop princess will be performing alongside Chaka Khan (Ain’t Nobody Does it Better than Chaka), Ciara, Billy Porter, Daya, and Todrick Hall at the benefit concert at the Barclays Center in Brooklyn set for Wednesday, June 26 form 7-10. And with Whoopi Goldberg taking on hosting duties, sarcastic remarks are guaranteed for all. Click here to purchase tickets.

Where: SummerStage at Central Park

In order to keep pride alive, there comes a time to gracefully pass on the rainbow flag to the next generation.  At the Youth Pride Event, we’re going to show them how to do it right. And who better than “Not Your Barbie Girl” singer Ava Marx to get them started on this right of passage? She’ll be belting it out as the headliner, accompanied by performances from 16-year old prodigy DJ Nandi. End it off with 15-year-old rapping sensation Deetrananda (read that as Dee transformed from Nandra), and meet and greets with members of the cast of POSE. This event is free for those under 21, $10 for anyone 21 and older and registration is required.

Look out the LGBTQ world! The woman with the flattop and the cheekbones is back and ready to take Pride Island by Storm.  None other than the legendary Grace Jones is set to perform Saturday night at Pier 97, so get your square hair in shape and get ready to show your pride. Opening acts include

But Saturday night won’t be the only night that’s alright for partying at the pier. Word has it that Madge (Madonna, for those who are not up on their LGBTQ history) herself is going to show up on Sunday night to round out the festivities with a few top hits. Hope she doesn’t run into Grace on the way in. (meow!) 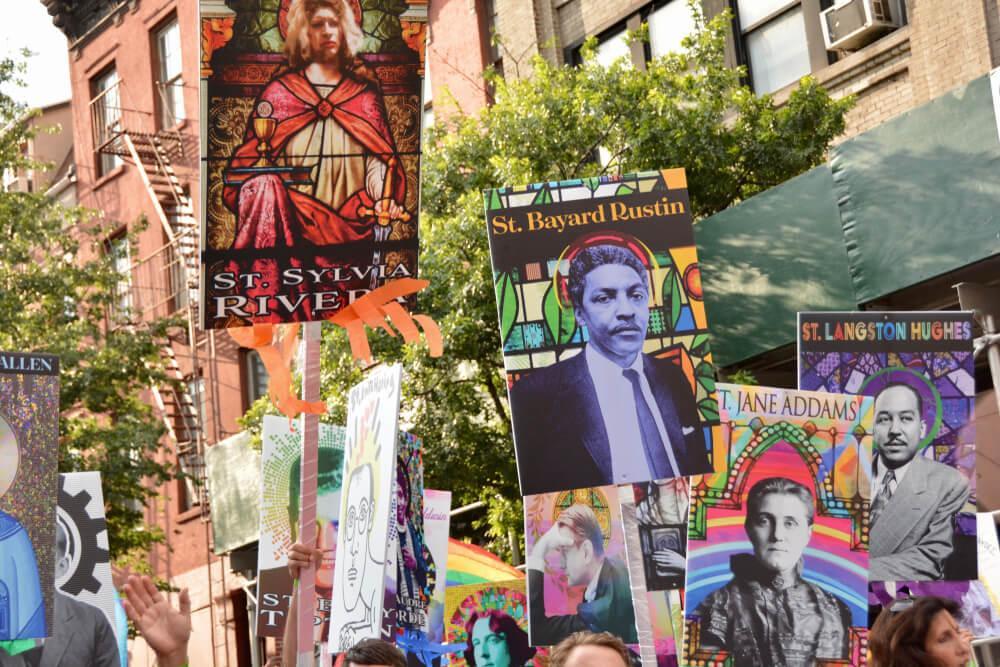 Where: The Grand, Terminal 5, The Hammerstein Ballroom

When it comes to dance parties the One World from Masterbeat is the beat to beat. Every year members of the pride community sweat off their makeup for the hottest dance party of the month.  At Masterbeat, the proudest of the proud gather to bring the house down for three days of decadence spanning three of the city’s hottest venues, including The Grand, Terminal 5 and The Hammerstein Ballroom. Think you can twerk with the masters? Make sure to get your tickets ahead of time, they sell out like beefcakes.

Want to see New York from the Queer Eye? Let your fairy guide mother take you on a historical tour of Greenwich Village with a stop for a complimentary cone at Big Gay’s ice cream. The Salty Pimp comes highly recommended (soft serve vanilla with an injection of dulce de leche) You’ll also get to stop for a few drinks at pubs like Marie’s Crisis and the Stonewall where it all went down. Click here for details.

Love Above All Ball

Get ready to trade in your gold lame mini for a gown and your biker vest for a three piece. The Love Above All Ball is the one and only black-tie affair of gay pride month held at the Rainbow Room in Midtown West. But don’t let the penguin suits fool you. The performances here are just about as campy as they come. You’ll see a performance by MARINA and Betty Who, and  DJ tracks from Casey Spooner and Miss Guy will be spun all night long. And don’t be shy about joining Shangela from the Ru-Paul show in for a sing-along burlesque show. Stay for the magic show and sword swallowing act to follow. Click here for details and ticket purchase.

Wanna rock in your pride month? Brooklyn Boulders calls all rugged types to climb its rainbow route with a donation to the Ali Forney Center for every selfie posted at the summit. Make sure to check out Queens Pride celebrations for drag queen boot camp and acro- yoga, the drag queen crown Climb-off Benefit, rainbow snow cones, and the Pride 3-D chalk mural. Don’t break a nail, honey. See you at the summit. 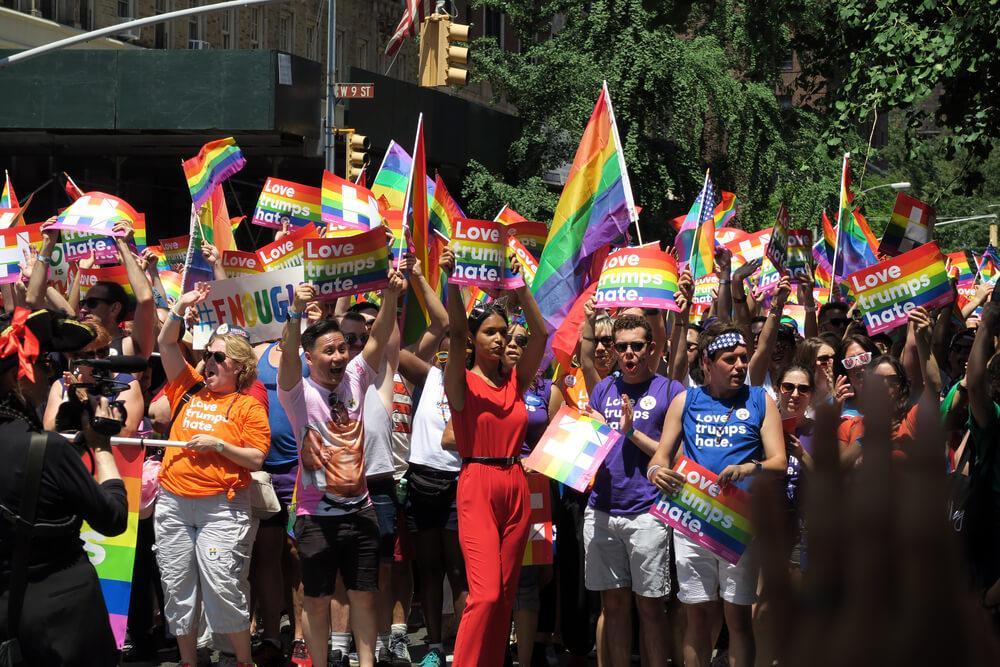 Move over Katy Perry! The original lesbian anthem writer is back and she’s set to hit the stage at the World Pride Closing Ceremony this year. Yes, none other than Melissa Etheridge, she of the raspy voice and sharp tongue, is set to headline the big finale event with Margaret Cho as the hostess cupcake. There are will also to be performances by Jake Shears, singing prodigy MNEK and the cast of the Broadway musical comedy, “The Prom.” The event is free, but registration is required.

Where: Christopher St. and Waverly Place

People really do have the power! One month after the Stonewall Riots in 1969, 500 people gathered for a “Gay Power” demonstration in Washington Square Park with a candlelight vigil in Sheridan Square to follow. Fifty years after, people will gather for a commemoration of the event at Christopher Street and Waverly Place to get their voices heard once again. Hear from Barbara Poma, PULSE Nightclub owner about the ONE Pulse Foundation and what its plans are for the LGBTQ community and then listen to Harnaam Kauer, the Bearded Dame herself, draw on her own childhood bullying experiences to help people embrace their beauty, in whatever form that comes in. Show up to show your support; it’s free and so are you. Click here to register.

There may be superheroes that can swing from building to building, but there are not many superheroes who can swing both ways. Not so at the Cosplay and Play festival. This Pride Costume party is the chance for all swingers to let their inner superheroes (and Disney characters) loose. Fairy godmothers are always a popular choice. This year, Petra Fried is hosting, so expect the entertainment to be fierce and the jokes to be appropriately inappropriate. If you’re on board for the boat cruise, drag performer Aja of Ru-Paul Drag Race fame will be doing the crooning.

Where to Eat in New York Pride Fest

When the letters LGBT seem to morph into the letters LG-BLT it means only one thing, you’re hungry. Why not eat your way toward progress?  If you eat at an LGBT run restaurant, you’re not just eating for yourself, your eating for the whole community (calorie count non-proportional). Here are some places to snag a bite and claim your right.

If you go to Prune in the month of June, you’ll find a lot of reasons to celebrate. Take for instance the spaghetti carbonara or the to -die- for Monte Cristo Sandwich. Celebrated author and chef Gabrielle Hamilton runs the place. Known for her way with ladies and her way with bacon, Hamilton dishes it up as well as she dishes it out. Read her confessional “Blood, Bones, and Butter” for juicy details.

Gay-gels anyone? For a real breakfast of champions to sustain yourself during pride week, say “Hello Rainbow Kitty” to Baz Bagels. The lox and cream cheese classic, the Rainbow Kitty is only one of the doughy delights at Baz. There are flat bagels (flagels), gluten-free options, latkes, and teas and coffee to go. Find this adorable shop in Little Italy, run by proud Jewish/Italian Bari Musacchio.

Want some burgers to go with that shake? At Julius, you can chow down on greasy burgers and shake all night to DJ tunes. Technically a gay bar, and one of the oldest in the city, Julius is the place to get all your cravings satisfied. When dinnertime ends, the DJ starts spinning and the dance floor comes to life. The third Thursday of every month, John Cameron Mitchell of “Hedwig and the Angry Inch” fame throws a theme party to be reckoned with. Check it out on June 20th.