An Oscar award-winning actress who has starred in everything from 12 Years a Slave to Queen of Katwe, Lupita Nyong’o has so many talents.

For those of you who are fans of this rising star, here are 18 things that you probably did not know about Lupita Nyong’o.

She has a Multi-Cultural Heritage

Although both of Lupita Nyong’o’s parents are Kenyan, the actress herself was born in Mexico City. This is where her first name, Lupita, comes from, as it is a traditional Mexican name.

Wondering about her last name?

While Nyong’o is a Kenyan surname, it is actually quite a rare name in Kenya.

Thanks to this multi-cultural heritage, Lupita is now fluent in several languages, including Swahili, English and Luo.

She Began Her Career With a Reality Show

Although Lupita Nyong’o is best known for her international movie roles, her acting career actually began in 2008, in Kenya.

Have you ever heard of the Kenyan television series Shuga: Love, Sex, Money?

It was quite a controversial series, and one commissioned by MTVBase, following a group of young Kenyans who were experiencing sexual awakenings. The main aim of the show was to raise awareness about HIV and AIDS.

Lupita Nyong’o was one of the stars of this show, giving her her very first taste of life in front of the cameras.

She Has Other Film-Making Talents

Lupita Nyong’o always wanted to be an actress, but, being sensible, Lupita also came up with a back-up plan, in case her acting career did not take off.

Still wanting to remain in the industry, Lupita’s other goal was to work her way up in the world of film-making.

In 2009, Lupita wrote, directed and produced her very first documentary, titled “In My Genes”.

Wondering what it was about?

It followed an individual called Agnes, a Kenyan who is a part of the country’s misunderstood Albino population. By lacking in skin pigmentation, the Albino population is often marginalized throughout the country, due to the fact that they are white-skinned in a black-skinned society.

The documentary is an interesting and thought-provoking one, and will likely be the first of many more to come from Lupita, who clearly has a natural talent for film-making as well as acting.

Her Other Family Members Are in the Spotlight Too

When it comes to the Nyong’o family, it isn’t just Lupita who has found herself in the spotlight…

Her father is an important politician in Kenya, while her cousin has risen to the top of the country’s media and tech industry, and has even been named by Forbes as one of the Top 20 Youngest Power Women in Africa. Lupita’s mother has also made a name for herself by being the managing director of the African Cancer Foundation.

She’s About to Publish a Children’s Book

It is no secret that Lupita Nyong’o has dark skin, and this is something that she has always faced criticisms about, especially when growing up.

Lupita wanted to tackle this at the root of the problem, addressing this issue directly with the next generation of children, so that they would not have to face the same struggles that she did.

How is she doing this?

By writing a children’s book, which is set to be published next January by Simon & Schuster Books for Young Readers.

Aimed for readers between the ages of five and seven, the book is titled Sulwe, and is about a 5-year-old girl growing up in Kenya, who has the darkest colored skin out of all of her family members. By embarking on an adventure, Sulwe ends up realizing that she is beautiful, and really emphasizes the way in which beauty should be inclusive.

Eve’s Bayou is Her Favorite Movie

Have you ever seen the movie Eve’s Bayou?

It is an American drama from 1997, and is about a 10-year-old black girl who learns that her family is not nearly as affluent as they made themselves out to seem.

Lupita loves Louisiana, which is where the movie is set, and she also loves all of the magical realism that the movie features.

She Loves Meeting Other Celebrities

While many celebrities play it cool when it comes to meeting other stars, Lupita always gets excited about the chance to meet some of her favorite celebs.

Since she was young, the actress has been a huge fan of many international celebrities, and even has a checklist of those that she really wants to meet.

Want to know which celebs are on the list? 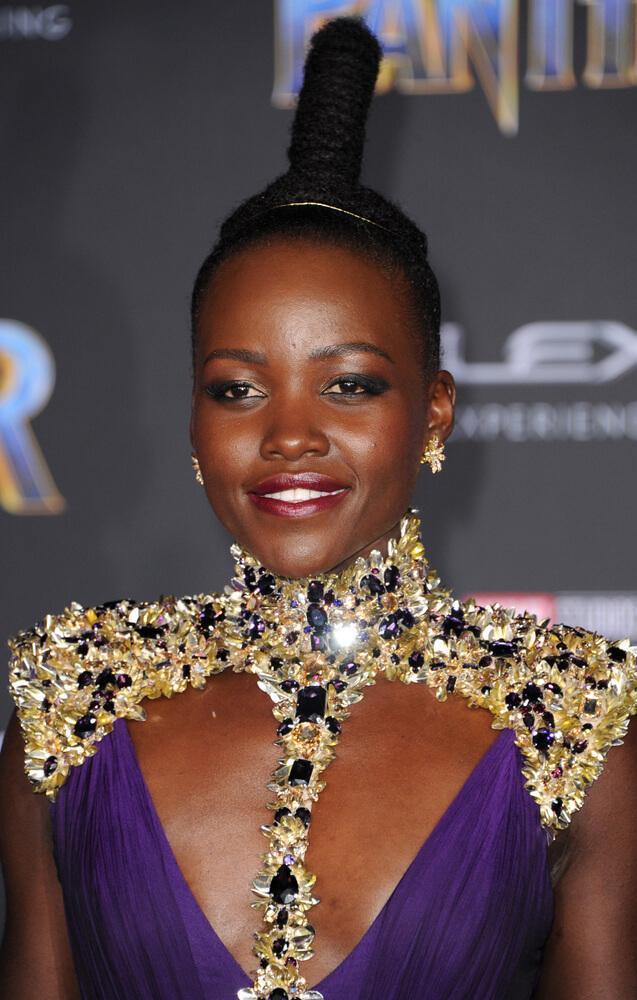 Black Panther is a movie that was released in February 2018, starring Lupita Nyong’o alongside other stars.

Just like many other movie roles out there, this one required the actors to take a six week boot camp before shooting began. Since the role that Lupita was playing was a street fighter, the actress had to work on several tecniques, including jujitsu and capoeira.

Fortunately, Lupita has always had an interest in martial arts, and has taken lessons on and off since she was seven years old, so these moves came quite naturally to her.

Being a Mother is Important to Her

While Lupita is currently focussing on pushing her career as far forward as possible, she is also just as passionate about the idea of having her own children one day.

The actress states that she feels as though she was “born to be a mother”, although she has not yet decided where in the world she would want to settle down and have children.

With such fond outdoor memories of her own childhood, the actress wants her children to be able to live somewhere where there are plenty of trees and grass for playing outside, and is still considering all of the possibilities around the world.

Coloring books designed for adults, rather than children, have been all the rage in recent years, and this is a trend that Lupita Nyong’o found herself really falling for.

She received her first coloring book for free, in a swag bag from an event she attended, and immediately went out and bought herself a set of coloring pencils, remembering how much she used to love this activity when she was a child.

After trying it as an adult, Lupita found that this was something she still really enjoyed doing, as it gave her a chance to relax while living in the moment. 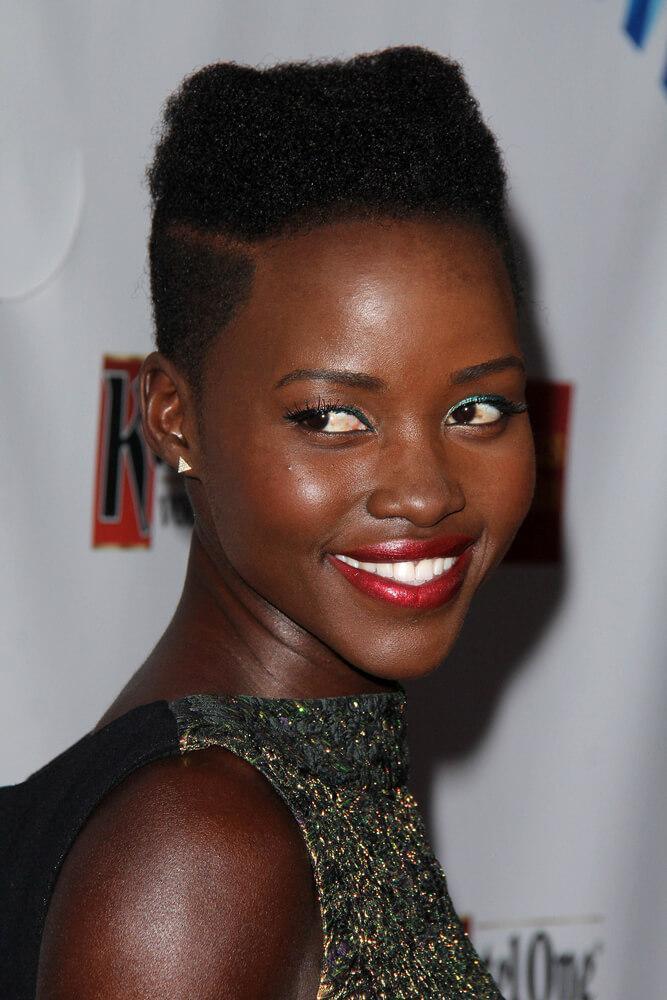 Not only did Lupita face struggles due to her skin color while growing up, but her natural hair also caused some issues.

Because her curly hair did not fit into conventional beauty standards, meaning she ended up being teased quite a bit about this.

Throughout her teenage years, Lupita tried many methods to tame her curls, but the upkeep was so expensive.

At one point, Lupita’s father joked that it would be much easier if she just shaved her head…

So what did the brave actress do?

She gave this a try!

Although it was quite a frightening move to make, Lupita also found that it empowered her.

Of course, once her hair grew back, she once again struggled with trying to keep it under control, and it was not until recently that the actress finally learned how she should be caring for her hair.

Now, Lupita’s hair is longer than it has been for more than ten years, and the actress is enjoying the many different styles that she has learned to create with it.

Lupita refers to her hair as being similar to clay, which, in the wrong hands, would be viewed as dirt, but, in the right hands, can be turned into a majestic piece of art.

She Fought Back Against Grazia UK

In 2017, Lupita Nyong’o did a shoot for the cover of Grazia UK magazine, in which she was wearing a ponytail that displayed her hair’s natural texture.

Once the magazine had gone to print, Lupita discovered that the cover image had been heavily edited, to the point where her ponytail had been removed, and the top of her hair had been smoothed down.

Lupita felt shocked by this misrepresentation, and spoke out to the magazine about this.

Grazia UK realized their mistake, and the photographer soon apologized to the actress.

She Directed A Music Video

While Lupita has no desire to be a singer or musician, the actress still loves music, to the extent where she even decided to direct a music video.

The video was for the song “The Little Things You Do”, by Wahu featuring Bobi Wine, and became quite the hit once it was released, being nominated in 2009 for the Best Video Award at MTV’s Africa Music Awards.

She’s a Fan of Video Games

Video games appeal to a wide variety of people, one of whom is Lupita Nyong’o.

In 1999, the actress visited the USA with her family, but rather than joining them on their sightseeing excursions, Lupita spent her time playing the Final Fantasy VIII video game.

While she does not have as much time to spare on video games now, this is still a past-time that Lupita really enjoys.

She Shares Her Birthday with Other Celebrities

It is always fun to take a look at which celebrities you share a birthday with, and there are a few that share Lupita’s.

The actress was born on the 1st of March, 1983, and this March 1st birthday date is shared by celebrities such as

She Used to Make Her Own Clothes

Although Lupita can now wear clothes from the finest designers all over the world, she did not always have access to this luxury.

Growing up, Lupita found the cost of new clothes to be quite high, and realized that she would be able to save quite a bit of money by making her own clothes.

So much time during her teenage years was spent creating stylish outfits to wear, and even her prom dress was something she made herself.

She Follows Danai Gurira’s Advice: “Go Where You Are Loved” 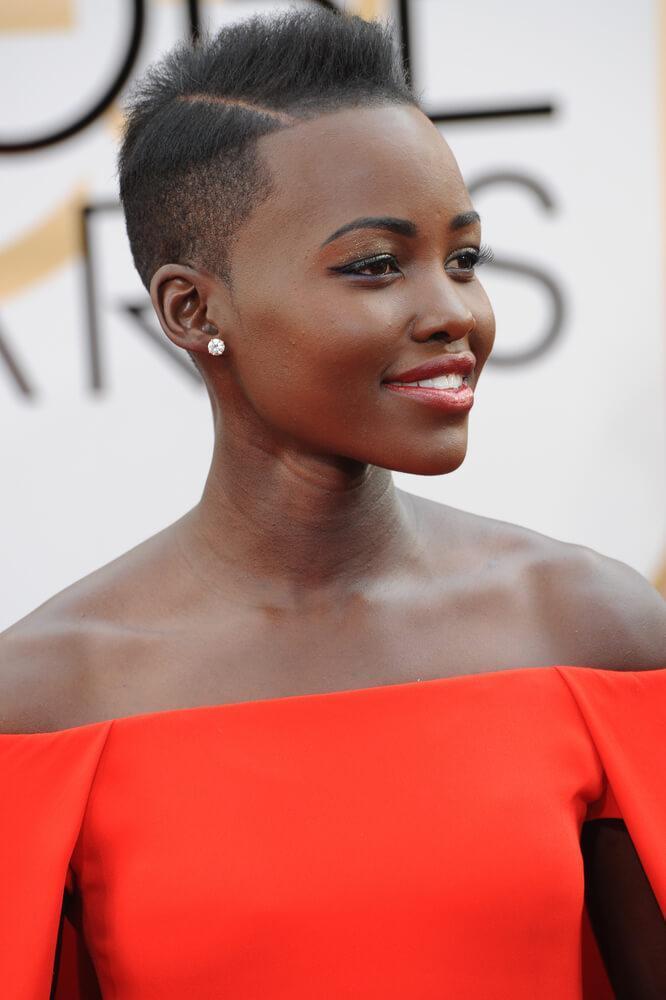 So many monumental individuals have given Lupita Nyong’o advice over the years, but the one piece of advice that has really stuck with her came from Danai Gurira, who wrote Eclipsed.

The advice was to “go where you are loved”, because this is what will help to bring out your dreams and ambitions in life.

Lupita has tried to follow this advice throughout her career, firmly believing that people who see the best in her will also be the ones who will be able to bring out the best in her.

She’s the Face of Miu Miu

Since 2013, Lupita Nyong’o has found herself appearing on so many Best Dressed lists, and has now even been appointed as the newest face of fashion brand Miu Miu.

Taking all of this into consideration, one would assume that Lupita is someone who loves fashion, but this is not quite true…

While the actress does enjoy getting dressed up, shopping itself is an activity that Lupita does not indulge in much.

Fortunately, since she works with Micaela Erlanger, a celebrity stylist, she is able to wear everything from haute couture from Christian Dior to the finest Gucci gowns, all picked out for her.

For those of you who have never seen one of her movies, there are plenty to choose from, including:

All of these movies showcase the actress’ incredible talents, making them well worth watching.