Home » Red Carpet Looks From the Academy Awards
Previous Next

If you came here thinking you were going to get an all-glamor lineup of red carpet garb fashion bests, revealing nothing but beyond-this-world beauty, may find it, as “beauty is in the eye of the beholder, but remember, a lot of what finds its way onto the red carpet on the proverbial backs of celebs is not exactly straightforward. And no deserving expose worth half its salt would be so remiss as to leave out some of the more memorable Awards-attire attempts. And then the question arises as to what truly constitutes deserving the tag of attire? Can a scant strip of lace, so loosely woven that its most densely knitted areas still feature one-inch holes be called attire? Apparently so, according to the steady progressional all gathered for their stellar red-earned moment to show their best poses before the paparazzi. Does anyone ever wonder if these stars spend a lot of time before a full-length mirror, in serious practice of finding the best one? If so, you might wonder how much time and effort is dedicated here. It is, after all, a really big moment of their career–past, present, and in advertising their desirable, hirable futures.

Big Memorable Bombs
Remembering Lady Gaga has never been a problem, with her envelope-pushing fashion prowess–which characteristically shares a baseline theme of showing off her smoking hot bod, but when the chanteuse showed up fully concealed behind/underneath/inside an Alaia structure, with its gargantuan proportions and huge short and gaping sleeves. It might have been a tad less revolting, if it had not been for the big, red, heavy duty Wichita Lineman ¾” gloves she chose as her only accessories–aside from some small and silent pearly ear baubles and something spindly and wiry sticking out from her low bun. If you didn’t have the chance to see them, Google “Popeye,” and check out the arms on the dude. These gloves would have been–well, let’s just say that it is highly likely that Gaga borrowed these from him. And then, there was the thing donned by Marion Cotillard with a dog-ugly sleeveless jumble of multi colors above a fussy, full-feathered skirt that had you looking for the swan’s head.

Full Disclosure
Oh my, where has fashion dignity disappeared to? While Baby Boomers remember holing up with the latest copy of their parents’ National Geographic mag for the one-and-only press-published peek at female mammary glands, times have changed. That 1960s-ish brazen “walk on the wild side,” meets today’s red carpet celebs, who forever relegate those fully featured NG photo glimpses of topless civilizations to today’s PG status.  With so many celebs baring all, what’s next? Perhaps window implants that reveal stars’ innards? To describe the material used to make these pieces–if you can call it material–it’s like the designers all got theirs from a factory that usually produces fishnet stockings. The lineup is too massive to name them all, but among the celebs that come to mind for showing up, showing all are. At least, when Zoe Kravitz showed up, her furry 1.5” holed fishnet frock included a leotard-type underthing to cover the four spots–you can figure out which ones. In a war-of-the-nudes, topping the year-of-skin-trend we find Beyonce, JLo and Kim K., working some serious epidermis with the final frontier just beyond view, from strategic placement of only a few sequins. Showing up a la Balmain for Kylie J. and Gigi Hadid leaves no stone unturned–and no skin un-shown. Will these be dresses they pass on down to their daughters? Time will tell… 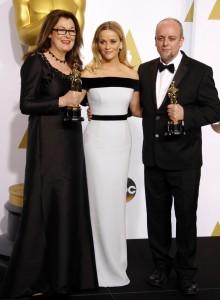 Failed Tries by Guys
If plain ugly comes with superlatives, some we’ll remember include a train conductor’s hat and awkwardly rolled up too high pants on Will.i.am–and musician Ahmir ‘Questlove’ Thompson’s black velvet jacket with satin lapels–that looked like it had been made for someone else. From the way his choice of red, sloppy half open, half tied sneakers made his extreme pronation so obvious, we’re wondering why, with all his cash, he has yet to see a podiatrist. A one size too small, purpley-lilac 80s-inspired tux + flower brooch + umbrella, even when done by Givenchy, couldn’t have better-ailed Jared Leto. Kevin Hart’s all white tuxedo with black lapels, black hanky-in-pocket, black shoes and black shirt–really?

Red Carpet Strangest
Looking more ready for Sesame Street with her headgear, Singer Sia’s head was totally obscured by a thing that featured blunt-cut, thick, kooky fringe hanging from a black brimmed hat, a full 360 degrees around. The mop-looking hair effect reached her jawline and surely the songstress traded in her vision that night for some undeterminable statement-making effect that we still haven’t yet figured out. Rihanna’s lavishly embroidered, canary yellow Guo Pei original may just be the most memorable–and most expensive of all-time. The trimmed in fur piece consumed a full 50,00 hrs. of made-by-hand time, and despite Rih’s simpler strappy shoes, the singer could not manage to get around while wearing it without tremendous help from at least 3 wranglers. Not that it really matters, but underneath this massive caped creation, she was wearing a little pink mini-dress. While there have been some stabs at what this “dress” (with a train as long as a city block) might have cost, there is currently no easy to find info on price. Hmmmm…

Your Friends are Lying to You, or Get a Mirror
With obvious absence of honest feedback and evidence of no self-check via a mirror, Chloe Moretz may have borrowed her big, blanket of a dress from someone thinner and taller–and had no way of knowing how it could not have been any less flattering and visually weight-adding, with a super full skirt. Somebody tell her. And speaking of friends–where was Oprah when Gail chose her figure-fattening ruched flop? And Gail really needs to buy a good bra with more support.