What is up With Miley Cyrus?!? The Crazy Things She is Doing Now

Home » What is up With Miley Cyrus?!? The Crazy Things She is Doing Now
Previous Next

What is up With Miley Cyrus?!? The Crazy Things She is Doing Now

What happens to a spoiled brat when she continues to get too much overt praise, adulation, fame and money as she grows up–without ever being told “no?” That’s right, you get Miley Cyrus! Surely the center of her own universe, this twerking Hannah Montana– just as a manifestation of her sheer self-love– and not exactly having so much to do with what she does, never stops trying. She manages to keep the paparazzi humming with “the latest” MC attention-seeking antics. While surely to impress her fan base, she leaves the rest of the world wishing unkind, eternally-humbling ends to her popularity. Miley Cyrus is Miley Cyrus’ biggest fan. Here are some of her more recent moments of “Miley just being Miley.”

“Make a Wish” and Arrogant Miley
Miley’s absence of compassion was never more articulately represented than when she was said to have ruined a seven year old fan’s request to meet her through Make A Wish. The little girl, also named Miley, was expected to have no more than six months left to live. When her family escorted her to LA to meet Cyrus, they were made to wait, day after day, for an entire week to meet Cyrus, who was in town the whole time. When they did get to meet Cyrus at the recording studio, sources reveal that Cyrus was more interested in what she was doing than anything about Miley the cancer patient with only months left, and paid her little or no attention. 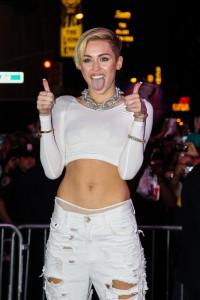 Mexican Disgrace
In a choreographed Monterrey, Mexico concert move, Cyrus twerked onstage while wearing a prosthetic rear end, with backup dancers spanking this faux appendage with the official Mexican flag. This was regarded as insulting to Mexicans, and fully enraged Mexican officials. In the Dominican Republic, Cyrus’s concert as banned because of included “acts that go against morals and customs, which are punishable by Dominican law.”

Other Tidbits
Cyrus’ recent promos for the MTV VMAs tried to be as shocking as possible, with one in which Cyrus silently performs her tongue repertoire, which she obviously loves to show off, 24/7. She even arrived onstage during her world tour via a huge tongue. And now, after totally bombing with men, maybe she’ll do better with her recent move to women, boasting of a hot and heavy relationship with Victoria’s Secret model Stella Maxwell. She’s not going to stop until we stop looking.