All About Saint West Kardashian – Kayne and Kim’s Latest Baby

All About Saint West Kardashian – Kayne and Kim’s Latest Baby

Wonder how little North West is going to feel about her baby brother, as he becomes more mobile, and once she figures out that he is not just a visitor to her world. Adjusting to a sibling is always a work in progress, and one that possibly never ends, as many grown up siblings will confess. One thing is for sure, though, there will be no shortage of attention for either West prodigy, with the full tilt public life chosen by the Kardashian clan. So add to the happy Wests a little boy to love, and from what Kris Jenner has to say, he is “delicious.” If he is anything nearly as adorable as big sissy North–and it’s already being said that he looks just like her–he’s sure to be a little doll.

Just “Baby Brother West?”
During early interrogatives regarding this baby’s name, the couple chose to remain vague, but we know that the “Saint” part was included early in the making. Questions about baby number two being given the moniker of “South,” they shared they had immediately dissed that one. Kim K. told reporters in a pre-West interview that they didn’t come up with a name for North until like seven days after she was born. Inquiring minds wonder how much of an inflation being named “Saint” might give to his ego, but even without the tag, even a simpleton would be able to figure out that this kid is going to be set for life and full of himself, from the get-go. No way around it. Weighing in at birth on the delivery room scales on Saturday at 8 lbs.1 oz., he’s certainly no tiny thing. The duo say that “Saint” came from the tenuous pregnancy causing gestational worries, and now that he’s arrived here, all safe and healthy, “Saint” just seemed to fit perfectly. 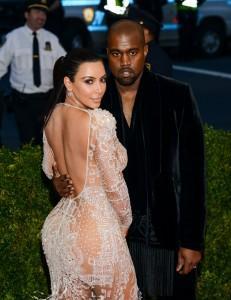 Named For Story Preceding Arrival
During Kim’s pregnancy, concerns developed over testing revealing that there had been evidence of an excess of fluid in her placenta, and toward the delivery date, she underwent a painful procedure to turn the baby around from his breach position, to facilitate a smoother delivery. So naming this little lad “Saint” was simply a means by which his story’s beginning would be celebrated. In the meantime, the happily expanded family is camping out with Grandma Jenner, as their home undergoing major renovations.

Hang On, There
There is a potential snag here, though, as according to the New Zealand Herald (where the couple is believed to reside,) reports that there are some laws in place by the Department of Internal Affairs that would forbid a naming of any child that might infer that the child holds a title or a rank. At least, they didn’t opt for the rumored “Fievel Goes West.”

We would love to hear from you! What do you think about the latest Kardashian name? Will there be another and if so, what names do YOU have in mind?