Fuller House is Back–What to Expect

Home » Fuller House is Back–What to Expect
Previous Next

Fuller House is Back–What to Expect

From 1987 to 1995, widower-father Danny Tanner’s life was all about his struggles in raising his three daughters all on his own as both dad and mom, following the untimely passing of his wife and mother to the couple’s three children. His best friend and his brother in law became his chief supporters as this father of three faced issue upon issue of all the typical struggles faced by modern parents of the time. This series was known to provide some really spot-on examples of problem-solving and positive insights into child-raising, while presented in laugh-a-minute articulation. America fell in love with this family, and by the time the show wrapped, there was absolutely no question about this house being full, with nine people living there, together–oh, and a dog, too. Each character had his or her particular fans following, and the Olsen twins (now famous for their adult antics,) stole the hearts of viewers, everywhere. We sighed in sorrow as we watched the final episode, knowing this show’s discontinuation would leave at huge gap in the better parts of our week–and it did.

Peek Preview, A la Ellen
In a recent airing, Ellen DeGeneres show viewers were given a snippet from the full trailer from Netflix, where the beloved show is returning. Later that same day, the popular streaming service released the full trailer, revealing an effective still-intact quality, with tons of the 90s making the voyage successfully. Catchphrases we never forgot, such as “Hola Tannerinos, “How rude,” “Have mercy” and more show-defining utterances of show uncles Jesse and Joey. The show introduced a good bit of 90s-sticking culture, like “Talk to the hand, Loser” among the best. 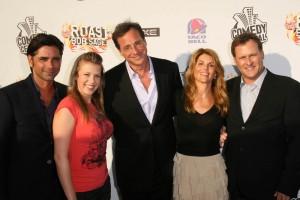 As You Might Have Expected
Perhaps not your very first, but to answer an anticipated biggie, it’s “No.” While this newer, crisper, modern (and as the name implies,) fuller” house will be the “home sweet home” location, viewers will enjoy being reunited with all the original cast members–well almost all, as two of them won’t be seen this go-round. And anyone’s first guess as to which two would be correct. Now, this being shared, there remains every hope and possibility that the most unforgettable identical twins tag team who played the adorable Michelle Tanner will, at some point, honor us with a cameo appearance, fan fingers crossed. Now, before you begin to dis the Michelle duo, know that it’s a scheduling thing, and not a sense of superiority or such. These two are fully entrenched as full time + overseers of much–including their winning labels the Row and Elizabeth and James–particularly hot favorites among celeb shoppers.

Revised Focus
In the newly scripted base theme, the new series turns its focus to the eldest daughter (played by Candace Cameron) DJ, who in the present day, is a widow and mom, turning to her family and friends for help. Will this all-grown assemblage pull us in as effectively as the first go-round? Certainly the show’s producers hope so. And even without the visual presence of Michelle, there will be ongoing references to her, just as though she’s still very much a part of things. So, if pre-release numbers reflect what’s to come, the trailer Netflix released on its first day alone drew over 10 million views–the most-viewed clip ever, on Netflix’s YouTube Channel. This way-topped Orange is the New Black’s trailer for Season 2, and was shared, liked and commented on, with almost 700,000 trailer views.

About the Author: Jakie Tran