Just when you thought the only way for a female celebrity to make millions was by starring on a reality show, Priyanka Chopra Jonas enters the picture and puts all Hollywood million-heiresses to shame. Not only has this Indian beauty held the title of Miss World 2000 but, as of 2017, she’s also held the title of Forbes 100 Most Powerful Women for two years running. Need we mention she now holds the title of Mrs. Nick Jonas as well? An odd combination may be, (not she and Nick Jonas- any Jo Bro is a good Jo Bro), but it all makes sense when you understand the components that went into the making of Priyanka Chopra Jonas.

No more shall the question be asked of whether brains and beauty can co-exist (and good riddance).  One only has to look at Chopra’s resume to see that she excels in both fields. She’s played the roles of actress, singer, film producer, pageant winner, and she’s also received the Padma Shri award from the Government of India in 2016. Plus, just look at her.

How do you get to be Priyanka Chopra Jonas? Or even just Priyanka Chopra? We’re not sure we can tell you how you can do it, but we can give you a little insight into how she did it, and it took a lot more than luck. Here is a little about how Priyanka got to be one of Forbes Top 100.

From Working to Working It

On July 18, 1962, Priyanka was born, but not quite from humble beginnings. Her parents were both physicians serving in the Indian Navy in Jamshedpur, India (Priyanka’s birthplace) and her mother’s parents both held positions in the Indian government. As high achievers, Priyanka’s family had similar expectations of their offspring. We might say, she well exceeded them.

Before her career as aeronautics engineer had a chance to get off the ground (thankfully – there may not have been a Quantico, otherwise), Priyanka’s Miss World India title began to gain her recognition. Acting offers from Bollywood started pouring in and she put her academic career on the back burner to try her hand at acting. But, make no mistake, by no means did Priyanka put her hard work ethic on the back burner. Priyanka has always known what she’s always kept her eyes wide open. She describes herself in her early years in this way:

“I was a gawky kid, had low self-esteem, came from a modest middle-class background, and had white marks on my legs – but I was damn hard working.  Today my legs sell 12 brands.” Including Pantene, we use it religiously. 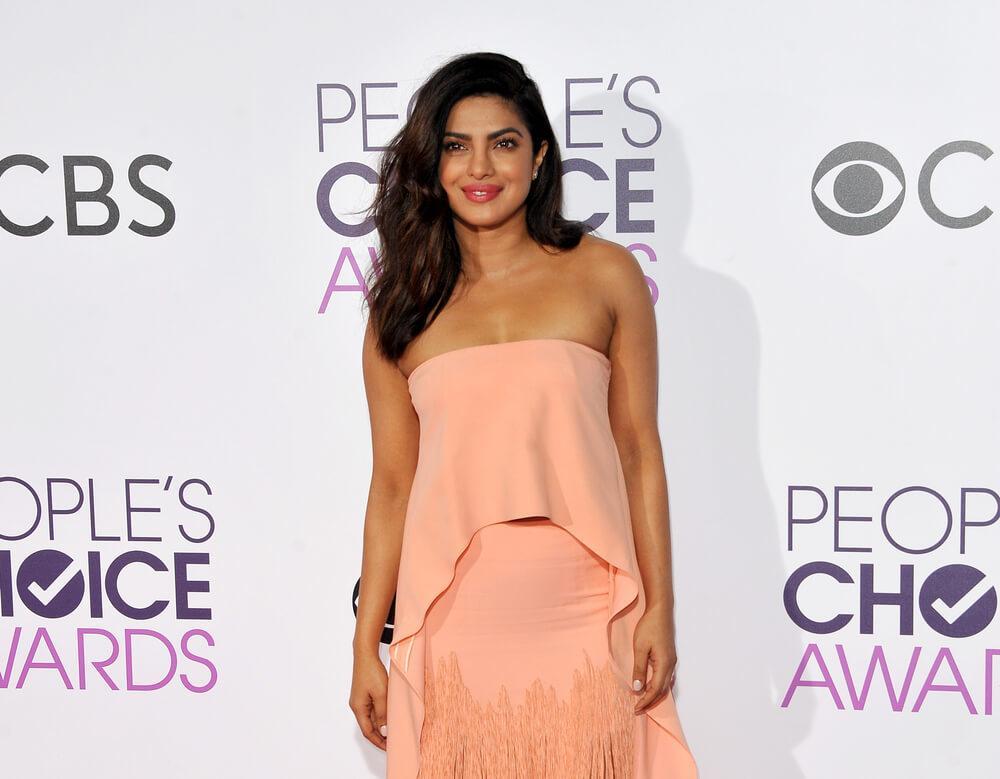 Can Priyanka act? She certainly can. Was it love at first sight? Well, why don’t we let Priyanka tell us how she really felt? “I hated it,” she says of her 2002 film debut in Thamazim. “I didn’t know what I was saying or doing.” But, if at first, you don’t succeed…..why not try again the next year? That’s what Priyanka did once in 2003 and four times in 2004 until she finally found triumph in the romantic comedy, “ Mujhse Shaadi Karoji.”

In the next few years, Priyanka paid her Bollywood dues and then some. She died her hair twice to play a double role (Love Story 2050), gained and successively lost thirteen pounds to portray a supermodel (Fashion), fainted from exhaustion during filming (traveling for endorsements as Miss India – oh my), and received a lot of less than encouraging critical response along the way. But to Priyanka, those reviews were just tough love. She knew if she persevered, she would win the approval of the critics and the hearts of Bollywood fans everywhere.

But soon, that B turned into an H. Priyanka had crossed the lines, in terms of career as well as logistics, from Bollywood to Hollywood. In 2015, Chopra signed a deal with ABC studios and was soon cast as Alex Parrish in the thriller television series “Quantico” making her the first South Asian woman to star in an American network drama series. In the following two years, Priyanka would nab the People’s Choice Award making her the first South Asian actress to win a People’s Choice.

She Has A Tattoo

So, what’s up with the tattoo? Does Priyanka have a secret badass side that she needs to express by writing it on her forearm? There’s nothing badass about this tattoo except for maybe the fact that it’s a tattoo itself. It reads “Daddy’s Little Girl” in her dad’s own handwriting. It’s a tribute to her dad who passed away from cancer at the age of 64 due to cancer.

Apparently, legs aren’t the only thing Chopra’s got a good set of. She’s also got a great set of  – lungs. Powerful enough to win her the position of Most Powerful Women on the Forbes list? They undoubtedly had something to do with it.

After all, her first single “In My City” soared to the top of the Hindi pop chart and was certified triple platinum immediately. With a little help from will.i.am, on loan from the Black-Eyed Peas with Fergie’s blessing, “In My City” earned Chopra the “Best International Debut Award” at People’s Choice India as well as the Trailblazer award for becoming the first Indian artist to earn a record deal in the US.

And with Pitbull lending his own brand of “street hop” (and charisma) to her second single, “Exotic” debuted at an impressive number sixteen on the Billboard Dance/Electronic Songs and an even more impressive number 11 on the Billboard Dance/ Electronic Digital Songs. Is a duet with Nick in the works? We certainly wouldn’t throw it out of the recording studio just yet.

Her Fashion Style Is Breathtaking 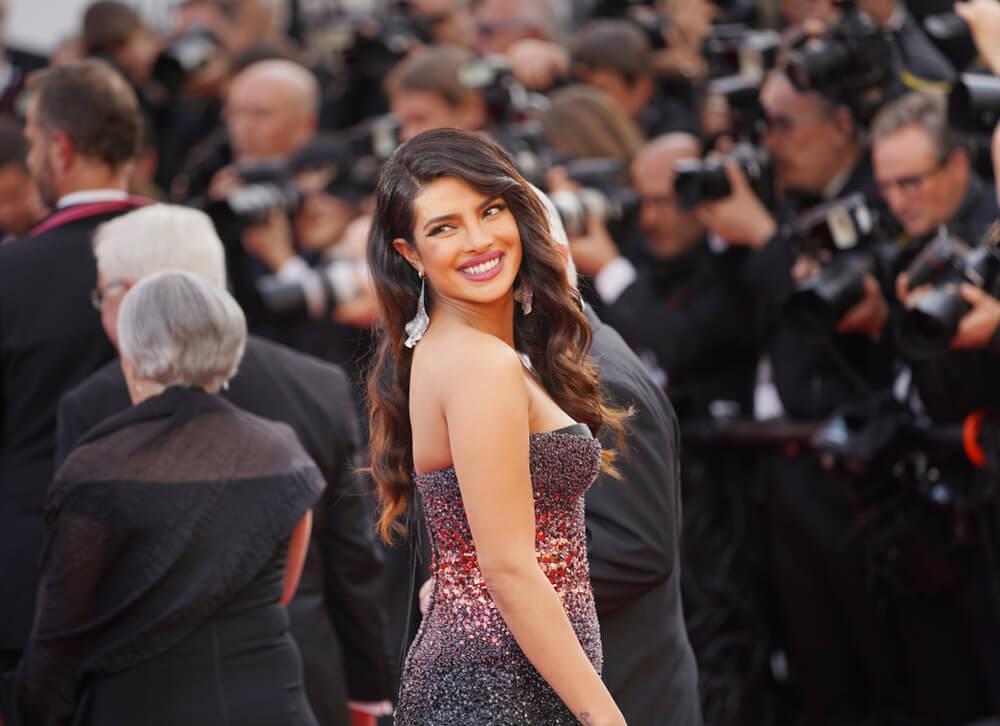 If we could only walk a day in Priyanka Chopra Jonas shoes, dresses, pants, blazers, or her Bottega Veneta jacket. Then again, we probably wouldn’t pull off as well as she does. Have you seen her in the Ralph Lauren trench coat at the Met Gala? Never before has an all-weather jacket looked so haute couture. Click here if for reference.

But why go on when designers Falguni and Shane Peacock put it best? “(Priyanka),” they wrote, “is comfortable in her own skin and looks ravishing in whatever she wears, be it a bikini, long or short dress, or even a sari.” So, on that note, let’s take a look and see how well Priyanka pulls off everything she puts on. Here are some of her best looks.

Priyanka looked ab fab when she took New York by storm at the Global Citizen Festival to End World Poverty by 2030 in Central Park. The sympathy was for the victims, the tee was the ripped-up tee shirt Pri rocked with a striped ruffle wrap skirt. The pointy ankle boots brought the perfect 80’s vibe. Click here to see it for yourself.

With the innocence of lace and the decadence of bare flesh, this dress has Priyanka written all over it. This bustier topped “naked dress” by Zuhair Murad was Priyanka’s red-carpet choice for the 2016 Oscars. Like a virgin, or like a Venus? Click here to decide.

Look out, Cher!  The genius of Ralph Lauren and the inspiration of Priyanka have met in a gown that would have the original exotic beauty rethinking her choice of headpiece. This bejeweled cowl meets this jewel-toned velvet gown in antique chic perfection. This is Priyanka in her element. Click here to see Priyanka at the 2018 Met Gala and prepare to be blown away.

A sex symbol and a symbol for humanitarianism? Hard as it may be to believe, these two polar opposites have come together in one person. It may be fair to say that Priyanka supports almost as many charities as movies that she’s made, dresses that she’s worn and songs that she’s recorded. That’s too many to talk about here. We can only give you a small idea of how big her heart is.

Her foundation “The Priyanka Chopra Foundation for Health and Education” works toward supporting health and education for underprivileged children around the world.

The causes she supports range from children rights to civil rights to animal rights,  conservation to the environment, fair trade to gender equality, hunger to human trafficking and well beyond.

She’s cleaned garbage in Mumbai for a national cleanliness campaign, voiced a life-sized elephant across Europe and America to educate kids about circus boycotts and animal captivity, was appointed goodwill ambassador for UNICEF and received the Mother Teresa Memorial Award for Social Justice in 2017. 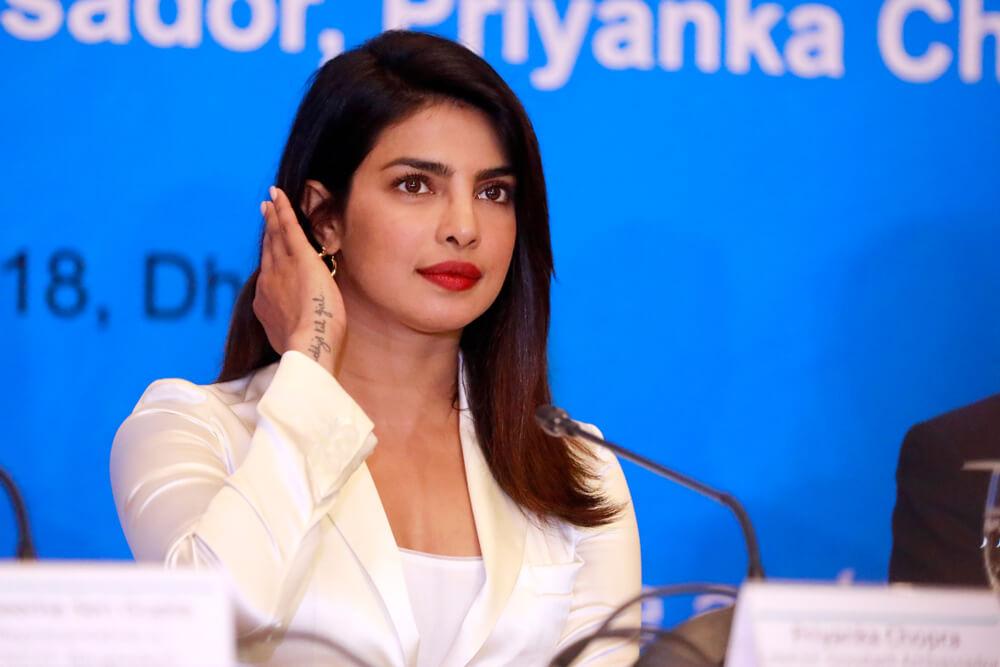 And can you imagine Pri singing John Lennon’s Imagine with a little help from Katy Perry, Idris Elba and Courtney Cox, and the Black-Eyed Peas in support of UNICEF? Don’t worry, you don’t have to. Check it out here. It’s absolutely stunning.

“I’m a private person and never thought I could express my feelings. But strangely enough, when I started to write this column, my innermost thoughts came to the fore.” If you get a chance to read “The Priyanka Chopra Column,” don’t expect a tell-all about Nick swept her off her feet. Her column is more about social issues than her social life.

No better person then Priyanka for tackling the tougher issues.  Her article “No Woman Feels Safe in Mumbai” raised awareness about the safety of women in cities. She’s written articles criticizing female genital mutilation and childhood marriage for the Guardian and her op-ed for the New York Times (“What Jane Austen Knew”) spoke about the importance of female education.

However, if you want to find out about Pri’s love-hate relationship with the red carpet, her obsession with Tupac and tacos, and the Bollywood dance that keeps her in shape, there’s a column for that too. Check out her Elle Magazine column Pret-a-Priyanka to see how even Priyanka is “just like us.”

Behind every powerful woman, there lurks a higher power. While we don’t know too much about Pri’s personal life, we do know that she is a practicing Hindu and does pujas (religiously?) She has a small shrine, that she even travels with, where she performs her devotional rituals to the deities every morning.

As for that little nod from Forbes, just another feather in the Chopra fascinator. “Thank you, Forbes,” she wrote, “Honored to be a part of such an exclusive and illustrious list of Power Women in the World for a second time. It’s a reminder to stay hungry, keep pushing the status quo, and continuing to do what I love. On that note #backtowork.”

Just screams Priyanka, doesn’t it?  We might be content to rest on her laurels, (beauty queen, actress, singer, writer, sister in law of two Jonas Brothers and the wife of one) but she has no plans of resting on her own. Let’s let her back to work. If she’s one of Forbes’ most powerful women, we say more power to her. The title couldn’t go to a woman more deserving.