Home » The Evolution of Vanessa Hudgens’ Fashion Sense
Previous Next

An American actress and singer, Vanessa Hudgens first became a household name around 2006, when she starred in Disney’s High School Musical. 11 years later, Hudgens’ resume has expanded to include a number of other hit movies, and, over these years, her fashion sense has evolved just as much as her acting skills have.

A Hint of Boho

Born in California, Vanessa Hudgens has always embraced the boho style, although in a much more subtle way when she was younger. 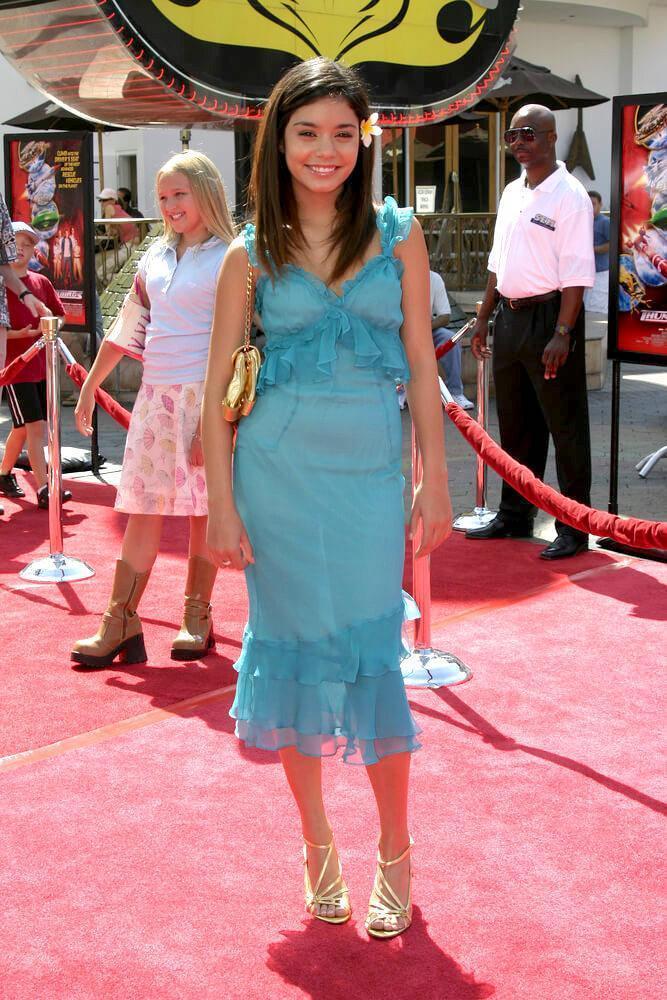 This image shows Hudgens in 2004, when she attended the Thunderbirds premiere in California.

The blue chiffon dress may seem a whole world away from the actress’ style now, but the daisy that has been carefully placed in her hair shows that her love for boho was evident even back then.

Want to replicate this style by putting flowers in your own hair? Here are a few tips to help you to pull this look off: 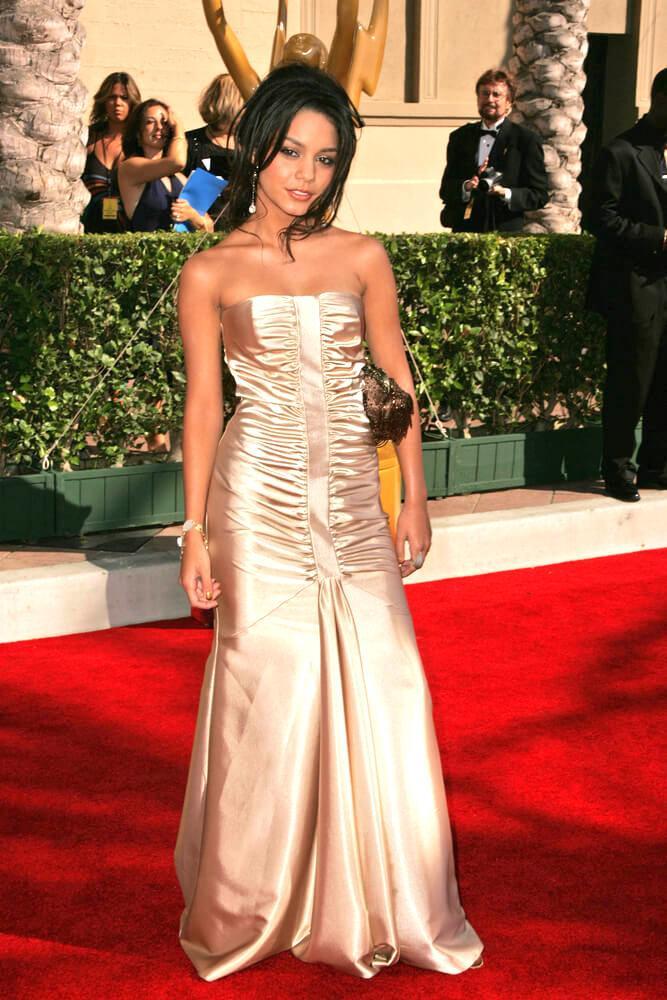 Thanks to her rise to fame due to her role in High School Musical, 2006 saw Hudgens making an increasing number of public appearances. While she did still keep many outfits relatively casual, this ruched champagne gown pictured was a dress that she wore to the 58th Annual Creative Arts Emmy Awards.

By choosing this dress, Hudgens took her first few steps into the more glamorous world of fashion. While many critics may claim that she did not manage to pull this look off, the overall outfit does have a much more mature appeal than the majority of her other looks at this time. 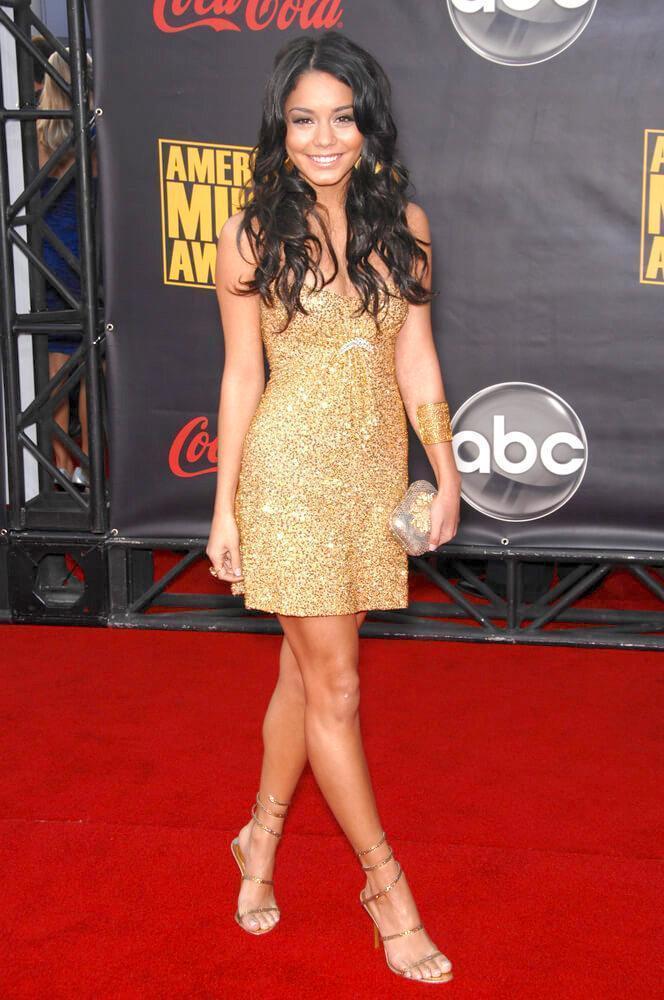 While many were not sure if Hudgens was able to pull off the glam look, the actress proved all of the critics wrong in 2007, when she showed up at the American Music Awards in a sparkly, golden dress.

Hudgens wore this mini with a pair of strappy high heels and a box clutch, while keeping the rest of her accessories to a minimum.

This is always the best way to style a more extravagant look, as you want the dress to really be able to speak for itself, rather than being drowned out by all of the added extras. 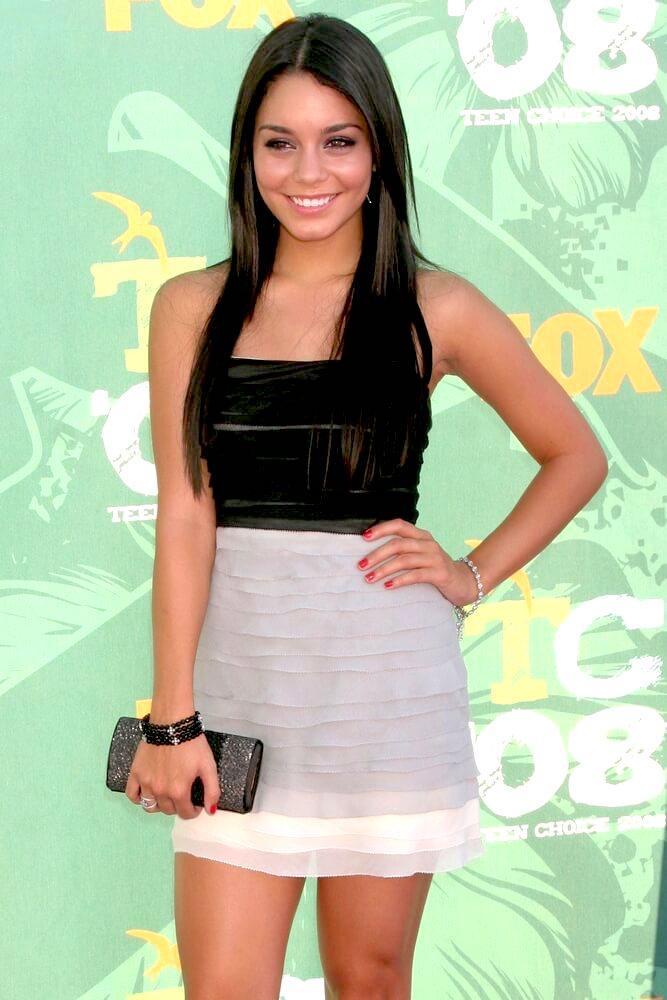 2008 saw quite the change in Vanessa Hudgens’ fashion sense, as she began stepping away from the more extravagant looks of previous years.

This image shows Hudgens at the Teen Choice Awards, where she wore a high-waisted tiered skirt with a fitted black top that showed off her shoulders.

This look was quite a chic one, and her straightened hair also helped to give her overall outfit a heightened sense of sleekness.

While this outfit may have been put together almost ten years ago, fashion goes through cycles, and the high-waisted skirt is now back on trend.

When it comes to choosing a high-waisted skirt, there are a few different styles that you could go for:

An Introduction to Designer Fashion 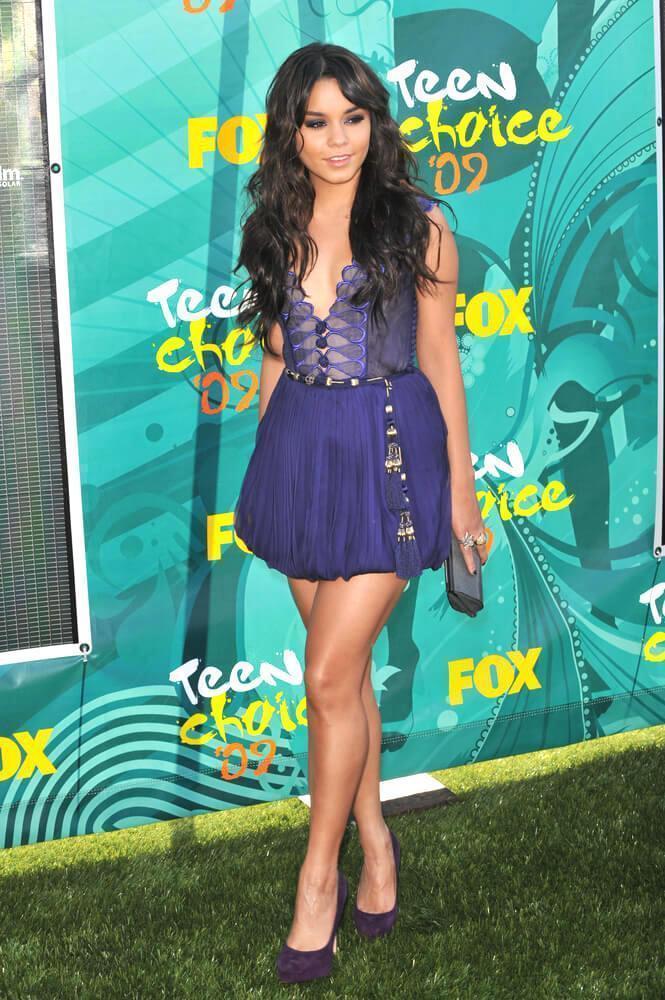 Up until now, high-end designers were not something that Hudgens made a huge effort to covet, but, 2009 was the year that this began to change.

One of the first high-end designer pieces that Hudgens was photographed in was this vibrant purple Christian Dior dress. The dress features quite a rich shade of purple, which beautifully complements Hudgens’ bronzed skin. The actress wore matching purple pumps to complete the look, and carried a shimmery clutch bag too. 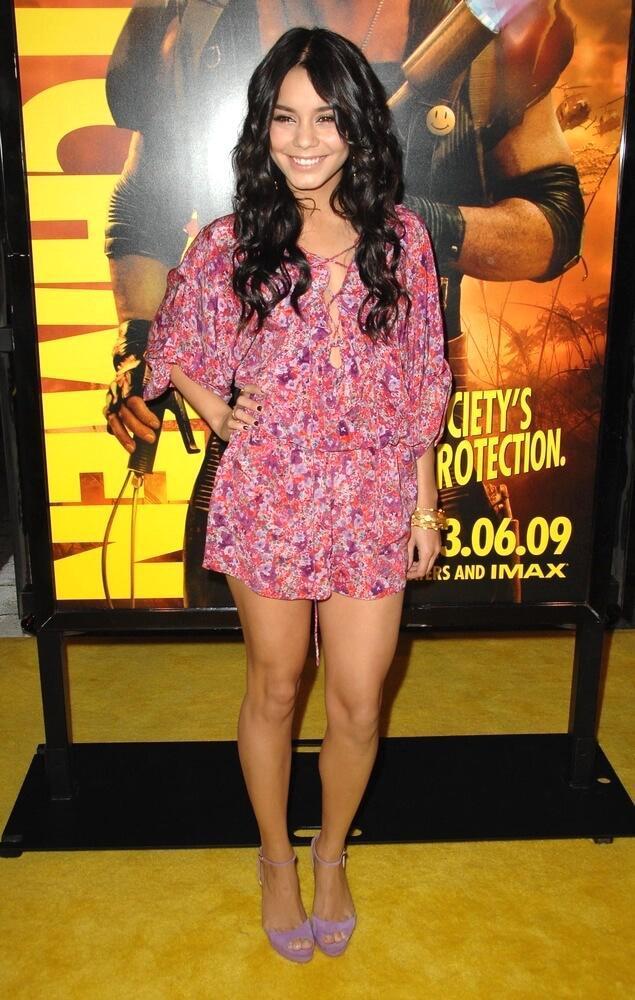 2009 was also when Hudgens was photographed in this floral Rebecca Taylor jumpsuit, at the premiere of Watchmen in Los Angeles. Worn with lilac heels and relaxed, wavy hair, Hudgens managed to pull this look off extremely well, exuding an effortless but stylish vibe.

Just like with high-waisted skirts, jumpsuits are also back in style now, and come in a number of different shapes and styles.

Want to give this look a try? Here are a few tips to keep in mind: 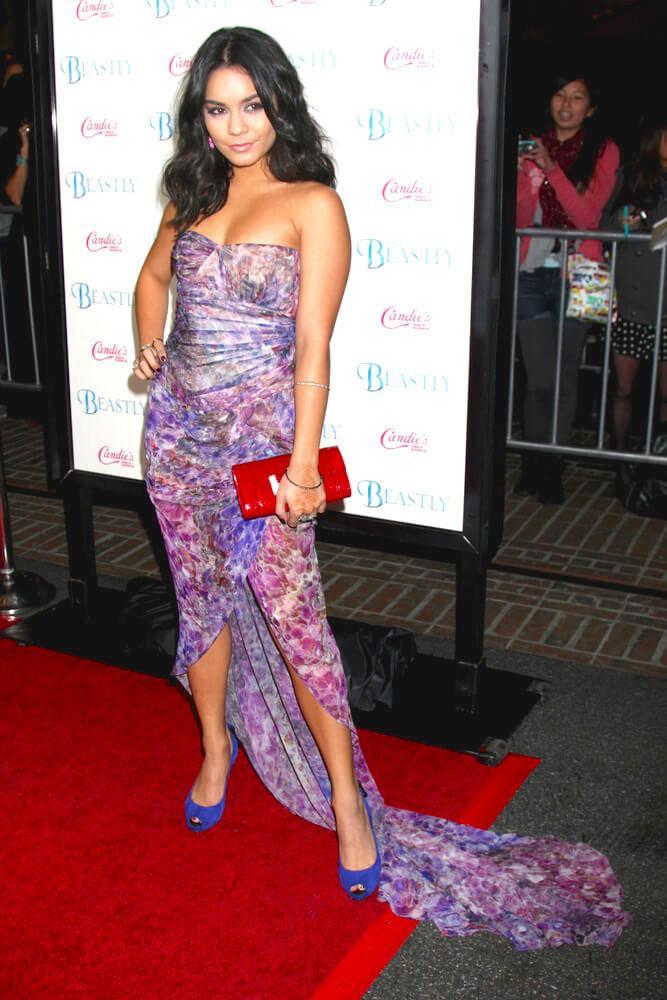 One of Vanessa Hudgens’ most popular looks of 2011 was the full-length Julien Macdonald gown that she wore to the Beastly premiere in Los Angeles. This was an ultra chic look that many were not expecting, as Hudgens had always tended to go for shorter, rather than longer, dresses.

This strapless, printed dress featured an asymmetrical hemline and a long train, adding a touch of drama to this beautifully feminine look.

In order to allow the dress to really stand out, Hudgens kept accessories to a minimum, opting for understated rings, bracelets and earrings. However, thanks to her blue shoes and red clutch bag, Hudgens still managed to provide her outfit with a few extra pops of color. 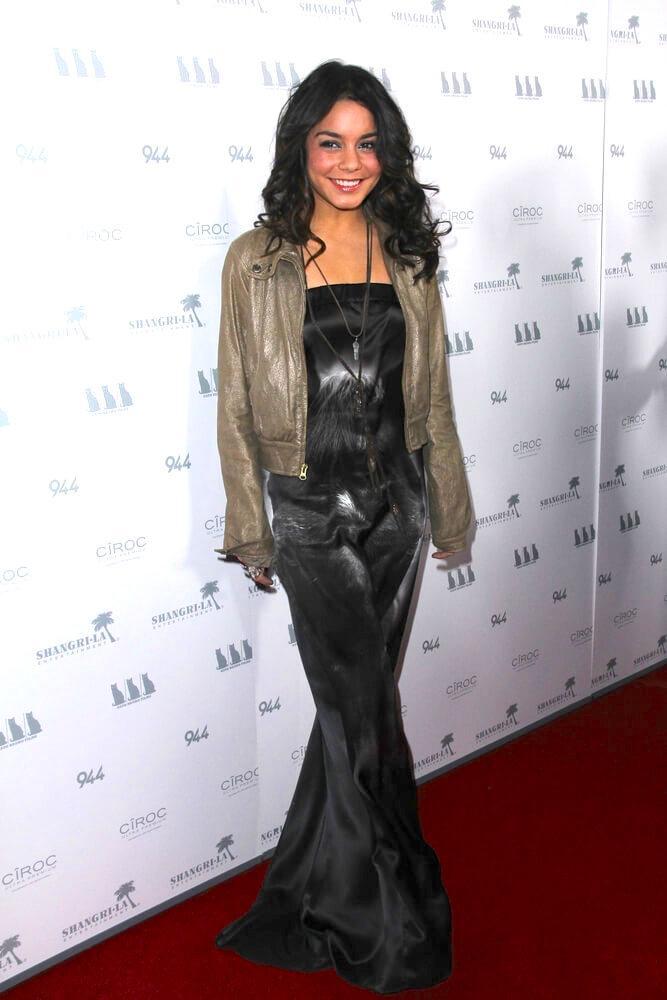 Also in 2011 was the LA screening for Girl Walks Into a Bar, which Hudgens attended. It was around this time that Hudgens began to experiment more and more with outerwear, and she took these ideas onto the red carpet.

Wearing a sleek, silk dress from 25 Park, Hudgens gave her outfit an edge of attitude by throwing an ecru leather bomber jacket over the top of this.

Pairing leather jackets with feminine dresses has been all the rage for a while now, as the toughness of the leather really offsets the softness of the dress’ fabric.

Love this look but don’t quite like the idea of wearing leather?

There is absolutely nothing wrong with opting for faux leather instead, and these pieces will also usually come along with a more acceptable price tag. However, keep in mind that faux leather will not tend to last for as long as real leather, and will also not have the ability to stretch and fit around your body in the same way. 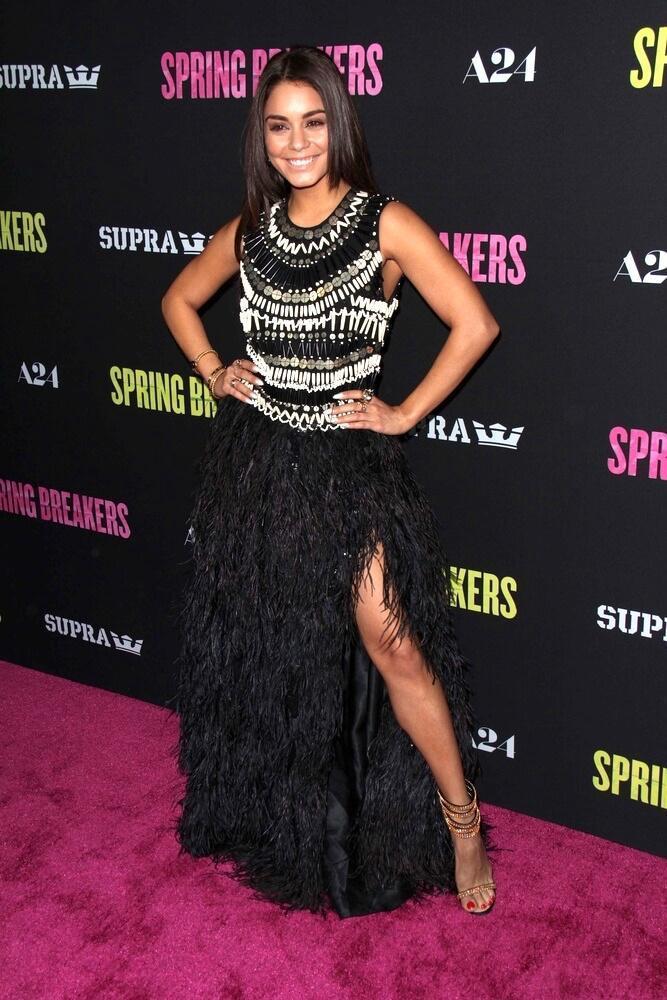 2013 was the year in which Hudgens began experimenting more with texture and pattern, with many of her outfits throughout the year showcasing this new style interest of hers.

Giving your outfit some texture and pattern really helps to add some depth to the whole look, while bringing out your own individual style. If you are new to mixing textures and patterns, here are a few ideas that you can try:

Try to experiment with the clothing that you already have in your wardrobe before purchasing new pieces, as this will give you the chance to see which textures and patterns work best for you. 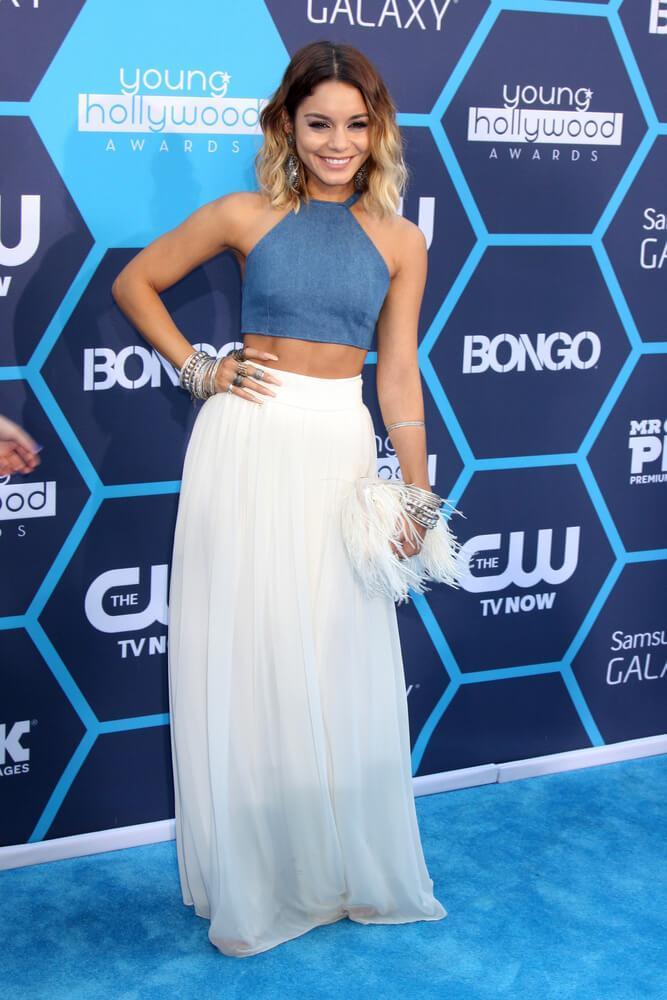 The boho look was always something that provided a bit of a backbone to Hudgens’ outfits over the years, but, in 2014, Hudgens seemed to put this boho twist back on the front line.

This look shows Hudgens at the Young Hollywood Awards, where she wore a cropped blue halter top with a white, flowing maxi skirt. These types of skirts have been making a comeback in recent years, making this look a great choice for the actress.

Since the outfit itself was relatively simple in terms of style and color, Hudgens gave this a bit more edge by piling on the accessories, opting for stacks of bangles and rings, with glitzy earrings.

Accessories can really help to completely transform an outfit, especially if you invest in a few statement pieces. Accessories also tend to work for just about every season, meaning that you will be able to wear your favorite pieces throughout the year. 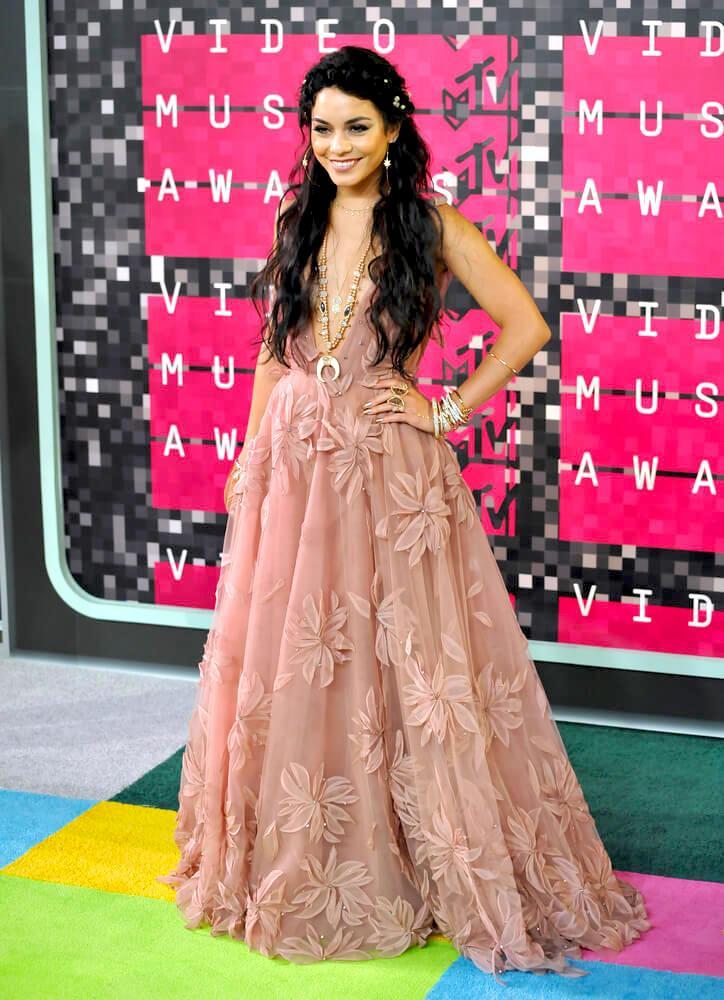 This type of braided hairstyle is one that you will see on Hudgens quite a bit, and really manages to complement her face, as well as showcasing her own personal style. If you would like to give this a try, there are many different ways in which you can braid your hair to give it a bohemian look, no matter what your hair length or texture may be. 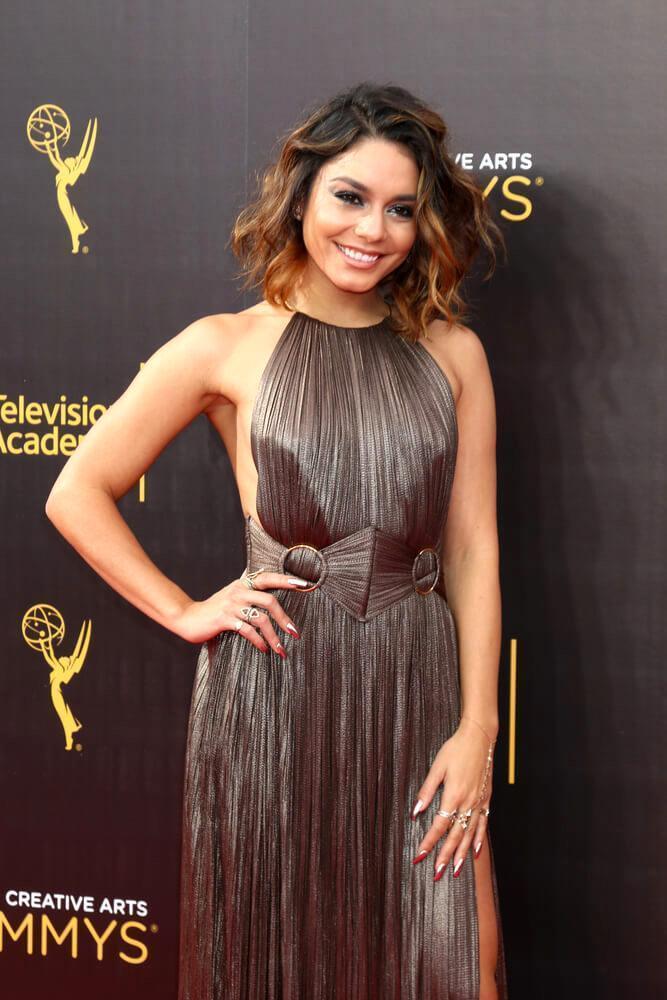 Rather than abandoning her love of boho in 2016, Hudgens kept this going, but simply toned it down a little bit instead. While she still made red carpet appearances in glamorous gowns, Hudgens would frequently style her hair in a short and beachy way, giving a relaxed and casual edge to her looks.

Beachy waves are so easy to achieve, and can really transform your whole look. Whether you opt for the use of a curling iron, or simply braid your hair while it is wet, a little bit of practice will soon have you mastering beachy waves for your hair. 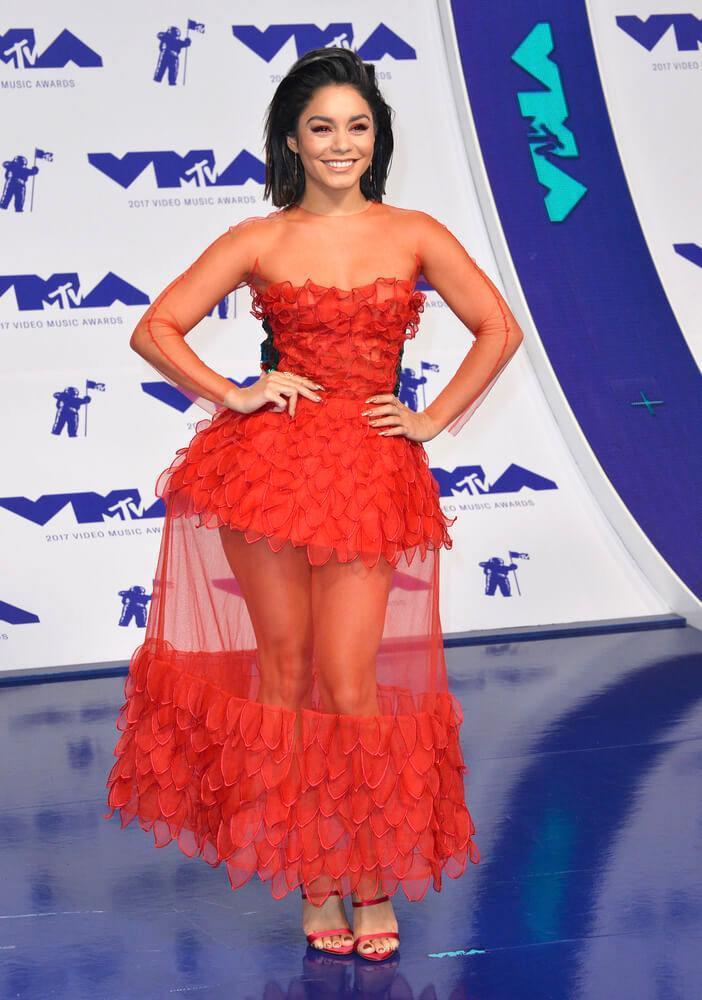 When you are always in the limelight, wearing quirky and adventurous outfits can sometimes be quite a daunting thought, as you are never going to be quite sure how they will be received.

However, if you are someone like Vanessa Hudgens, who has bags and bags of confidence, experimenting with more adventurous outfits is definitely the way forward, especially if you want to stand out from the crowd.

Now that 2017 is here, Hudgens is really embracing more adventurous looks. In August, Hudgens showed up at the MTV Video Music Awards wearing a ruffled red dress that featured sheer panelling. While the dress did seem quite daring in a way, the panels were perfectly placed to protect the actress’ modesty, and the overall outfit was still much tamer than many of the others that were seen on the red carpet that night.

This was an event at which Hudgens really wanted to stand out, and she paired her dress with bold red lips and classic cat-eye eyeliner, as well as some strappy red rhinestone heels. While this look may be slightly too over-the-top for the average event, Hudgens managed to pull this off perfectly, and was definitely one of the stars of the show.

Wondering who designed the dress?

Yanina Couture, a Russian label, was behind the creation. Their pieces are frequently worn by celebrities, including Gwen Stefani, Gigi Hadid, and Paris Jackson.

As you can see, the last 11 years has brought about quite a big change in Vanessa Hudgens’ fashion sense. When the actress was still a Disney star, fashion and style were still relatively new to her, and you can see that her outfits take on a new sense of maturity as the years progress.

Now that Hudgens is so much more confident in her own personal style, this has given her the freedom to experiment with a wider range of looks, so it will be exciting to see exactly where this ends up taking the actress in the future.