We all love a good love story and you’ll be happy to know that many of your fave celebrity couples have the sweetest ‘how we met’ tales going. That’s why we’ve done our research and discovered all of the crazy and romantic situations that led to each of their love connections! 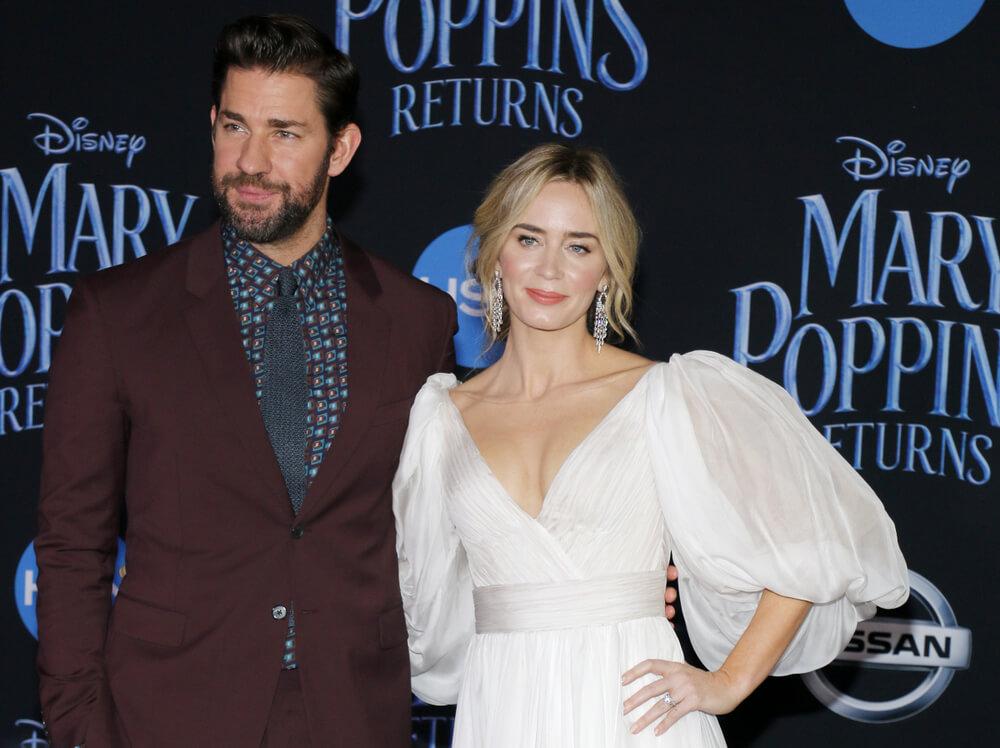 Trust us when we say, it’d be very hard to find a Hollywood couple more in love than Emily & John. From gazing lovingly at one another throughout every red carpet appearance to talking each other up constantly in interviews, and thanking one other in award acceptance speeches. There’s no question that these two aren’t just spouses, but also the best of friends.

Emily and John met way back in 2008. They each were eating separately with friends, but in the same restaurant when Emily’s dinner companion spotted John whom they already knew, at another table. John made his way over to Emily’s table (leaving his dinner buddy Justin Theroux alone!) where he proceeded to make her laugh and the rest is history!

Emily says she knew John was the one very early on and she was absolutely right as they were engaged within 10 months. Twelve years later this acting power couple has a decade of married life behind them and two beautiful daughters!

With 23 years of marriage under their belts, Will and Jada are undoubtedly one of Hollywood’s most beloved, and successful power couples to date! We adore how this pair is always willing to talk about the real-life struggles of modern relationships and to share their wisdom about how they’ve come so far together and have remained in love to this day.

They met in 1994 when Jada auditioned for the role of Will’s girlfriend of The Fresh Prince Of Bel-Air. Unfortunately, Jada was considered too petite for the role and it was given to another actress. Will was also married at the time so the stars didn’t align for them just yet.

However, Will never forgot Jada and when he and his first wife, (and mother to his first sonTrey) Sheree Zampino decided to split up, Will knew he and Jada were meant to be together and they began dating almost immediately.

25 years and two more children later, Will and Jada are still together! 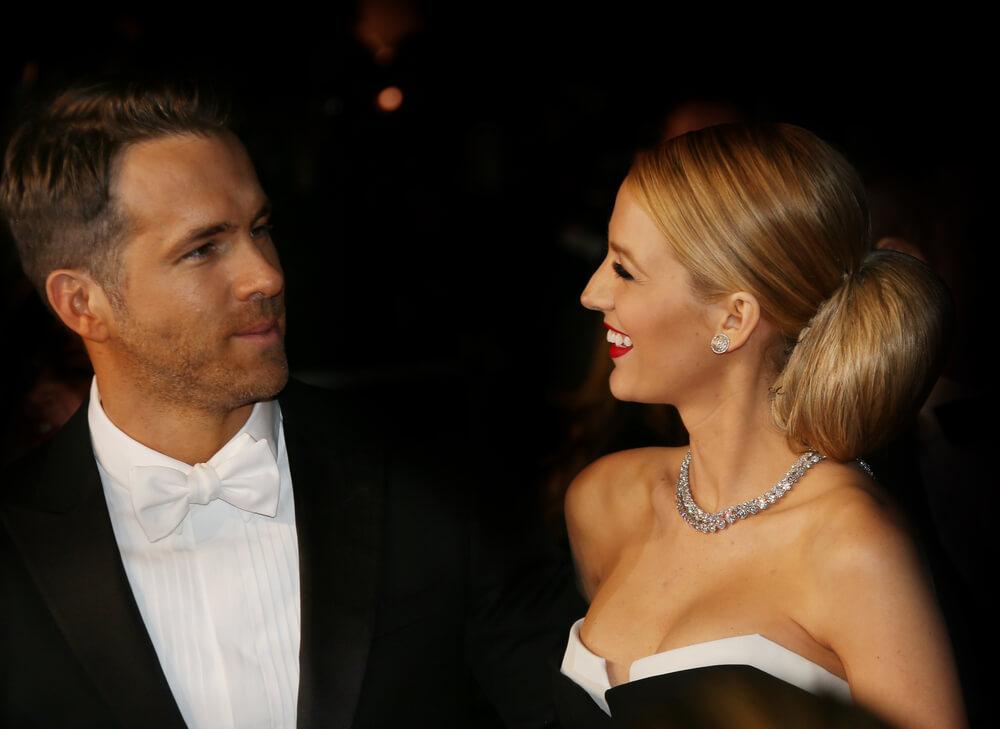 And the award for the funniest celebrity couple goes to… Blake and Ryan! These two are as entertaining as they are romantic and we just can’t get enough of their love for each other! You can usually spot them cracking up on the red carpet, pulling faces together online, or trolling one another (funnily and lovingly of course!) on social media!

When these two beauties met on the set of 2010s The Green Lantern, Blake was dating Penn Badgley (Aka, Dan Humphrey- Aka, Loney Boy) and Ryan, was married to Scarlett Johansson (and yes, we always forget they were married too!). Though they were both attached, they became friends and stayed that way until 2011 when Ryan and Scarlett divorced and Blake and Penn also called it quits.

It was during that year that, as friends, they decided a double date was in order, Blake with another guy and Ryan with another girl. Unfortunately for the two that joined them, sparks began flying but only between Blake and Ryan! They quickly became a couple and married the very next year. 8 years on they have two children together and seem happier than ever!

Goldie Hawn and Kurt Russell are one of America’s most iconic and beloved couples and have been an item since February 14th, 1983. That’s right, 37 years together and they’re still totally in love! Perhaps the key to a long, happy life together is to forgo the “I do’s” and simply choose each other every day. Starting things off on the most romantic day of the year couldn’t hurt either!

Goldie and Kurt first mat in 1966 whilst filming the movie, The One and Only, Genuine, Original Family Band. It wasn’t until they met again on the set of the movie, Swing Shift, however, that they became partners both on and of the screen. Almost 40 years later, there’s no doubt that these two are one of Hollywood’s most beloved and enduring pairs! 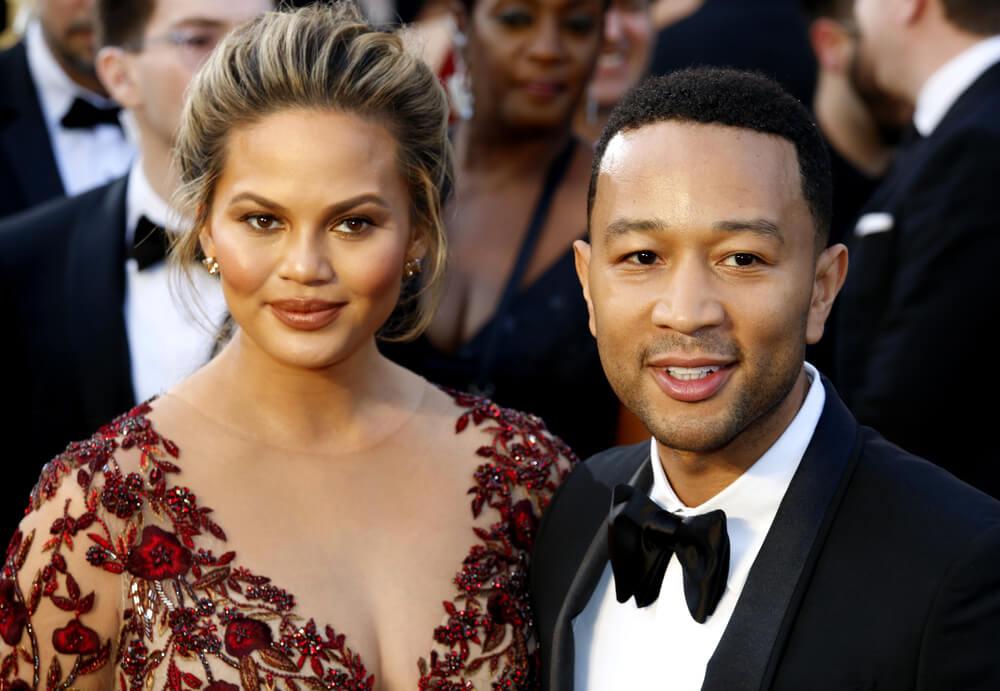 They may not have been together quite as long as Kurt and Goldie but John and Chrissy still have one of the world’s sweetest, most enviable relationships going!

In case you weren’t already aware, John’s hit 2013 song, All Of Me was written for Chrissy after they got engaged. The music video for the song featured the couple together in Lake Como, the place they had visited together six years earlier on another romantic getaway during which Chrissy wished that John would one day become her husband. The couple was eventually married there with the end of the video featuring an actual clip of the couple walking down the aisle after saying I do!

Back in 2007, Chrissy starred as the love interest in John’s music video for his song, Stereo. After spending the entire day together shooting, it appears the two weren’t able to say goodbye and still haven’t 13 years later! The couple dated for around four years before John proposed on a romantic trip to the Maldives and the two now share two beautiful children.

If an image of David Burtka and Neil Patrick Harris exists where they’re not sharing a laugh or looking totally in love with one another, we’re yet to find it! This totally adorable pair have been together for 16 years and seems more and more in love as time goes on. They’re forever sharing sweet family snaps and messages of love for each other online and we just can’t get enough of their joy!

Neil and David met back in 2004 when Neil was single and David was in a long-distance relationship. The pair started hanging out together as friends but just a week after David’s relationship ended, they went on their first date. From that day they began spending more and more time together and became inseparable!

The pair waited until 2011 when the Marriage equality bill was passed, to announce their engagement and were later married in Italy in 2014. This adorable pair have been together ever since and they now live in New York raising their two beautiful children. 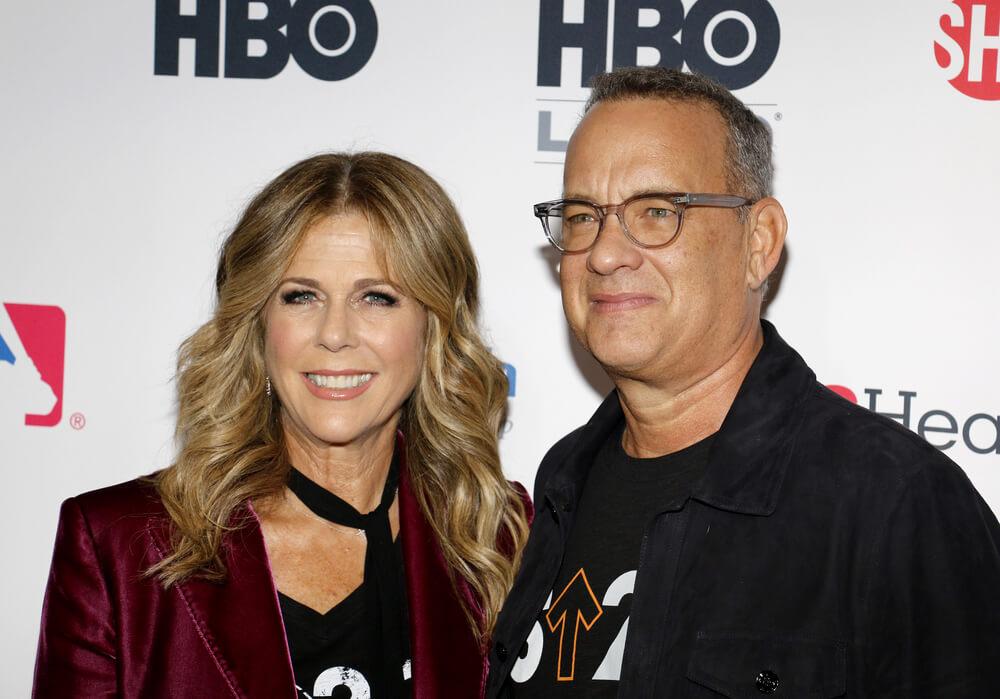 We’re pretty certain that everyone in the world is a fan of Tom Hanks but nobody more so than his amazing wife, Rita Wilson. This lovely pair have been together since 1985 and are still going strong!

Want to know a fun fact about these two?

Fans of iconic Rom-Com, Sleepless In Seattle, might just now be remembering that Tom and Rita both starred in the movie, as brother and sister!

Tom first laid eyes on Rita in 1972 when she guest-starred in The Brady Bunch. He was taken with her immediately but nothing happened between the pair and Tom eventually married his high school sweetheart in 1978. Years later, however, Tom and Rita worked together on an episode of Tom’s ’80’s sitcom, Bosom Buddies, and then again on the movie Volunteers in 1985. It was during this second meeting that they fell for one another. After Tom and his wife separated the next year, he and Rita made their red carpet debut as a couple and haven’t left each other’s side since!

Another of Hollywood’s most enduring, and adorable couples we might add, are Hugh Jackman and Deborra Lee Furness. These two might have been together for almost 25 years but they’re just as happy as a couple on their first date!

Hugh and Deborra met when working together on Australian drama Correlli, in 1995. Deborra was already a big star in Australia whilst Hugh was just starting out. They quickly became best friends which led to both developing feelings for each other. But, not wanting to be unprofessional, they each initially kept their crushes secret!

After finally admitting their feelings to one another during a dinner party Hugh was hosting a few weeks later, their relationship moved from strength to strength, and the pair married in 1996. They have since adopted two children together and are happily based in New York City. 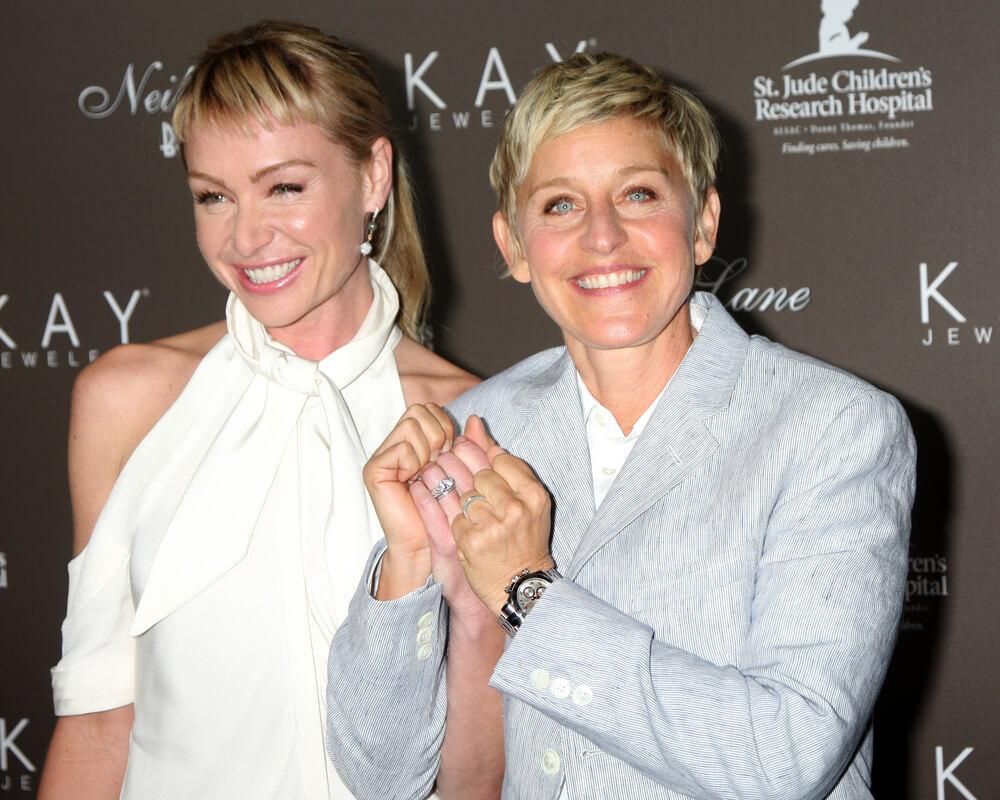 Ellen and Portia have been together for what feels like forever and we think we know why. During a surprise appearance by Portia on Ellen’s 60th Birthday taping of her show, Ellen revealed a line from Portia’s wedding vows which said, “It’s good to be loved, it’s profound to be understood”. This pair clearly understand and love one another completely and it shows!

Everybody knows and loves Ellen and Portia but not everyone knows how they met. It was actually way back in 2000 when they first laid eyes on one another, however, as Portia was not yet living as an openly gay person, it wasn’t until 2004 that they started dating. Since that day the pair fell deeper and deeper in love and finally tied the knot with an intimate ceremony in the summer of 2008!

One of the more modern-day style meetings on our list comes courtesy of Joe Jonas and Sophie Turner! Whilst these two are, in general, pretty private about the in’s and out’s of their relationship, we all were treated to those incredible videos and photographs of their very public, surprise Vegas wedding in May 2019! This unexpected ceremony has thrust their relationship even further into the spotlight, now everybody wants to know even more about this totally loved up pair!

These two were smitten from the minute he slid into her DM’S back in 2016. Mutual friends of the couple had been trying to introduce them for quite some time and seems they were totally right in their matchmaking quests!

Joe and Sophie dated from then and got engaged in 2017. They were famously wed in that sensational Vegas ceremony last year and had a more formal ceremony with friends and family the following month. Joe and Sophie are currently awaiting the arrival of their first baby! 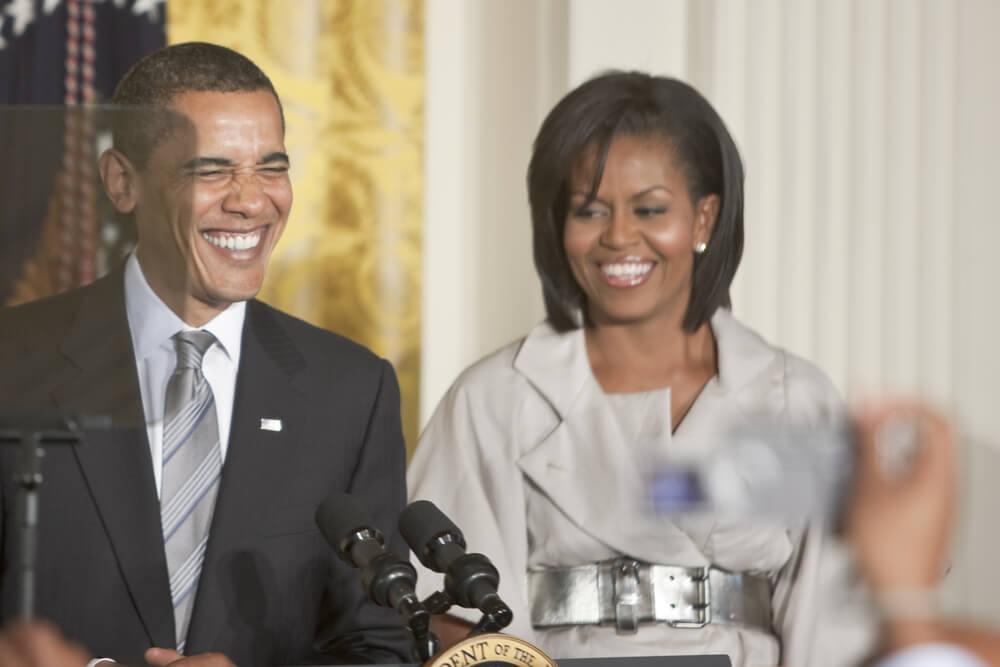 The former POTUS and FLOTUS, are one of the world’s most beloved couples for so many reasons. Their obvious love and support for one another and their children shines through with every interview and appearance and we just couldn’t adore their sweet romance more!

Michelle and Barack Obama met when both were in their twenties back in 1989. They had both graduated from Harvard and were working at the same law firm where Michelle was assigned to Barack as his mentor.

After just one month of working together, Barack asked Michelle on a date. Though she was unsure at first, she eventually said yes to lunch! By 1991 the pair were engaged and then married the following year.

Fun fact, in 1998 the couple welcomed their first daughter on the most patriotic date of all, July 4th! Their second child, Natasha Obama came along just three years later to complete their happy family.

'Here’s How Your Favorite Celebrity Couples Met' has no comments