The “dad bod” has been getting a lot of play in the media these days as celebrities like Leonardo DiCaprio and Seth Rogen have made waves for their softer bodies. Yet most of these “dad bod” types aren’t actually dads, and some of Hollywood’s hottest dads actually have some of the hottest bodies. They may be dads, but they still look like the calendar models of our dreams – and many women find the family man with a hot bod even more desirable than the bachelor “playboy” role that is all too common in Hollywood today!

Here are our picks for some of Hollywood’s hottest dads:

Channing Tatum
He stole our hearts in “Magic Mike,” and he’s kept that rock-hard body even while raising a family. He continues to steal our hearts with his heartfelt shoutouts to his wife and daughter in social media and interviews. This family man mentality makes the ladies even more enthralled with this on and off screen babe. He’s a hottie with a heart of gold.

Johnny Depp
Johnny Depp’s kids may be old enough to start making their own stamp on Hollywood, but Depp hasn’t lost his edge. He continues to be one of the hottest dads in the industry, and he maintains his edgy good looks and sexy body. It may be the strenuous roles that require him to stay in tip top shape – roles such as Pirates of the Caribbean, keeping all eyes on him and coming back for more. We wouldn’t mind being stranded on a desert island with him. 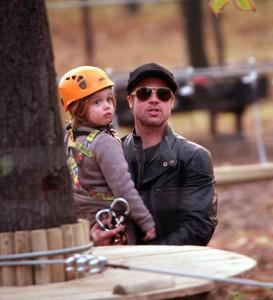 Brad Pitt
Brad Pitt has never been far from our hearts, but he proved that there were even more reasons to love him when he adopted three kids with Angeline Jolie and then had three more with her. He has been a devoted family man while also lobbying for humanitarian causes around the globe. Swoon! From Legends of the Fall to the Oceans films, Pitt NEVER fails to satisfy his audience.

Vin Diesel
Not ALL “dad bods” are on the up and up these days – in fact some tend to fluctuate to put it mildly. Evidently, Vin Diesel has been the center of a firestorm of viral videos as his dad bod has been criticized lately. Denying this claim, Diesel has addressed this video and pretty much comes off as he could care less. It’s tough enough staying in shape with kids, but imagine being in the public eye – all of the time!

Who is your favorite Hollywood dad?