Anyone who was staying up on the chanteuse and her peculiarities probably remembers her many over-the-top self-care requirements that should have been enough to signal her current ex Nick Cannon to run for his life–instead of marrying her only 6 weeks after meeting her. But, no, the rapper/crooner and host of America’s Got Talent was apparently blinded by the light–and enraptured enough to stick it out with the song diva through six long, hard years and twins is now finally citing irreconcilable differences as his way out. According to his laundry list of other weirdness, of which Maria has chronically been at the vanguard for as long as the world has known her–or of her–he reports of there always having been trouble in paradise, mostly due to Carey’s extreme paranoia, along with her absence of any responsible parenting skills.–Oh yes, and her lavish spending habits certainly didn’t help.  Other Carey characteristics include strange eating habits, psychosis, how she puts down fellow artists and her odd sexual proclivities.

Irreconcilable? You BET She is–and All on Her Own!
Among Carey’s myriad of obsessive behaviors are how she reportedly refuses to be photographed from her right side, to making costars and crew work around her frequent nap schedule. She’s known for barking orders at backup singers and the diva has a giant “M” inlay on the floor of her Manhattan digs. Oh, and the poor nannies for the twins keep on moving through a revolving door, operated by Carey, who snaps her fingers when describing that she fires nannies “like this.” She cites how every one of them has tried to become too important (as in more important than her) in the minds of her precious children. Insiders have revealed details of how Carey stays up until 7 am, drinking champagne and obsessing over pictures of herself–and then napping until 4 pm the following day. She is best described by “living in her own world by tuning out anything she does not want to be a part of it. 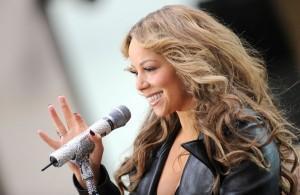 Nexxxt?
Apparently billionaire James Packer is electing to snub these sordid details–while flagrantly ignoring the tried and true “where there’s smoke, there’s fire” warning, as evidenced by his marriage proposal. And even though the two new lovebirds have been spotted galavanting from country to country–sometimes aboard Packer’s yacht wearing matching bathrobes–the exact status of the Cannon-Carey divorce proceedings is not quite known. Heck, for that matter, it even appears that Mrs. Erica Packer is still legally wed to current hubby Mr.James Packer. Is someone putting the cart before the horse here? Who knows???

Love at First Concert
Packer attended a Carey concert in the late fall and has been pursuing her ever since. His extreme affection for the songstress–and her songs is his obsession–with Packer blasting her music at peak volume from his yacht, everywhere they go. Unlike Cannon, Packer, at 48, is older than Carey, who is 45. He’s co-chair of Melco Crown Entertainment, which develops, owns and operates a slew of casinos in–not Vegas, but Asia! He’s reported by Forbes mag to be Australia’s 4th-richest man, with his meager 3.8 billion. Packer hails from Australia, as the son of Australian Kerry Packer–well-known media mogul.

Inquiring minds were worried that the diminutive Carey might have difficulties holding up her tiny, delicate hand while adorned with her promissory (bigger-than-Liz’s-33) 35 carat diamond and platinum ring, but it looks like she’s finding a way to manage. This will be the third go-round for each of the two, whose combined children will total five.

Time Will Tell
We’re just going to have to wait to see how this one plays out–but if you combine what we already know about the bride-to-be with some fairly spot-on remarriage stats–well, let’s just hope for the best and keep from going all-out on a wedding gift.